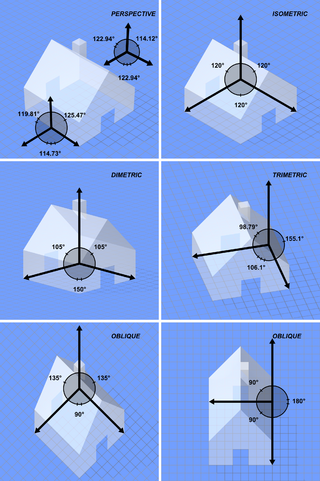 This page is intended to complete the Category:Isometric 3D, check the categories at the bottom of this page to get more related links.

It will feature techniques in creating Isometric 3D and graphics.

Isometric 3D is a representation of 3D with a total lack of perspective.

The proper concept is actually Parallel Projection, as some games are are sometime using other parallel projections than isometric.

Pac-Mania for example is not really "isometric" but actually "Oblique".

Yet the term Isometric is the most commonly used, as it suit for most of those 3D-looking games, so we'll use it as a whole, despite sometimes un-properly.

The isometric and most parallel projection originate from engineering, Architecture, design and technical drawing.

As such, they have a theory and precise specifications, and own a lot to the work of Gaspard Monge, a French Mathematician from the French revolution era.

However due to the pixelised nature of bitmap graphics and Cathode Ray Tube display, also due to the un-regular aspect ratio of pixels (which depend on the videomode, the screen/Monitor used, but also the colour displayed), Parallel projection's types can't be really accurate due to variation and approximation in axis' scales.

Those term's use are then mostly indicative.

The global term is parallel projection. But in common language we often talk indistinctly about Isometric...

Y is always vertical on screen.

the diagonal ratio is X1 for Y1. This was sometimes used in some Speccy originated games as this enable to put more tiles or elements on the horizontally limited Speccy resolution .

on the other hand you can also flatten this with a 4x1 ratio, more often seen on CPC (and in Mode0).

1x1 or 4x1 are way to reduced the needed screen dimension to display the same number of elements...

A proper isometric render always need to get masked sprites so they may appear upon or behind other elements.

Also some Scenery Elements which are to be put in front of sprites also have to be masked.

A heavy job is needed to define the masks and sprites "priority" so the 3D effect works : the background elements being obscured by the foreground elements.

As such, a proper "3D" parallel projection engine can be quite difficult to get running smoothly and fast as a lot of work may be needed for the Z80 CPU.

Concerning the Amstrad Plus range, the extra features may be difficult to use in such an environment.

Due to them being always above the normal bitmap screen. They still can be easily used to add extra visual effects or extra HUD elements, or even to patch some foreground only elements/tiles.

Proper isometric can be hard to mix with Hardsprites, but cavalier perspective games may be easier with those.

In turn based GUI like games (like Hero Quest) the sprites are obviously a clever way to get a proper "Mouse cursor" with additional extra colours and ready to use mask.

The diagonal graphics are not easy to mix with horizontal rasters interrupts or video Mode changes...

But it can still be used for some HUD or windows which may not cross the play field (with a vertical 256 pixels sized screen).

Or in Mode0 games : with a "lot" of existing inks, so more margin to play with those ink changes with no clashes.

let's say this can also be used to ease horizontal scrolling provided the kind of game actually need it.

The few real Plus games don't make a great use of parallel projection.

World Of Sports ( Cartridge ) for its BMX part (cavalier perspective).

Operation Thunderbolt ( Cartridge ) perhaps use some cosmetic cavalier perspective for the horizontal scrolling parts but it is more a CPC old game with "refreshed" graphics.

Getting some Sprites a shadow on the floor is a nice way to ease the player's comprehension of the 3D effect and environment, yet it was rarely used.

Head over Heels is notable because when your Sprite (mostly "Head" who could glide in the air) was in "altitude" you may not easily see were it is actually in the X,Z plane.

Yet putting a vertical shadow may be heavier on the CPU and Ram consuming...

The square pixels from Mode1 was usually preferred for real Isometric.

Yet games in mode 0 managed well with it or other parallel projections type too.

Some reasons the Mode1 was anyway quite popular :

In Mode1, the limited set of inks (only 4 ink) need a proper colour management.

The technique used in Head Over Heels was certainly the best one  :

Hero Quest is quite similar yet fail to achieve this level of goodness.

The floor-tiles and background walls are masked, the "4th colour" (grey, actually ink0) is nearly never used inside those except for the "empty floor" or the "Mouse cursor"...

What was, what could, what should.

A more clever use of the transparency/mask ink with the Floor/Wall tiles could enable to display this background grey in those floor/wall tiles but it wasn't done... which is a serious graphical limitation alongside a poor colours choice, which leads to the sprites and scenery being quite blurred into a blue messy hell as the background can't differentiate properly through the use of an additional different colour.

It is also to notice that some basic floor tiles use only 2 inks+transparency (Blue and dark blue) the "light cyan" seen in the jointed floor-tiles being then obtained by the pixels-crossing from 2 different Floor-tiles.

This greatly increase the games quality and understandability of the environment despite being still inferior to real 2bpp graphics in 3 or 4 colours for Sprites or backgrounds, and this still enable some Amstrad CPC's specificity over the ZX spectrum : the lack of colour clashes that goes so well with Isometric variations.

There a comparison with the different way to do it :

Gauntlet3, FireTrap, HeroQuest, Head Over Heels. Notice that Gauntlet's HUD is in proper 2bpp graphics to add insult to injury.

Due to the larger set of ink, there is no problem to find one ink to get the mask.

By the way because of the wider pixels, you need bigger sprites to get some details with them, so those games are quite heavy to manage and often quite slow, but delightfull to the eyes...

Yet this can also used to put hidden features and secret passages too.

A problem with Isometric was the need to put HUD in corners of the screen.

As a result, it was rarely possible to add extra colours thanks to raster interrupts because the oblique HUD often cross the games windows.

Head over Heels and many Mode1 games deal well with this lack of colours with many palette changes from room to room. While the game only display 4 colours at a time on screen, those colours change often when you explore the levels

A proper scrolled isometric game would need 2 diagonal scrollings and perhaps a vertical scrolling too, not the easiest to get.

Some "Beat'hem All" games in approximate Cavalier Perspective managed to get some decent scrolling, often an horizontal one...

Double Dragon series are typical examples of such games, with Horizontal scrolling.

Pac-Mania is a notable example of multi-scrolled parallel projection game. its Cavalier Perspective being perhaps more suitable for multi-scrolling as it need only 1 diagonal scrolling and 1 horizontal scrolling.

Scrolling was often a severe lack in many Amstrad CPC's games anyway.

Parallel projection is quite suitable for many kind of games.

A Projection based environment can be used as 2D or 3D environment/engine.

Because it still have some traditional Horizontal and vertical axis, this projection often stick to the up/down and left/right way to move the Player's sprite. As a result, this projection if more than often only cosmetic : the background looks like 3D but the game and the sprites are clearly 2D.

To move "vertically" (Y axis), you need to jump (Fire button), otherwise the basic 4 directions really stick to the 2 horizontal plane axis' (X and Z), one of them (Z) being "diagonal" on the screen. This is helped by the railroaded aspect of the labyrinth which prevent any Diagonal move (on the X/Z plane) to be exploited. As a result, you can jump in X and Z axis.

most 2D or Isometric environment may have some issues concerning distances.

A Square's diagonals is longer the its sides.

To get a realistic distance/time ratio (speed), you may need to compensate or else the diagonal moves can be exploited, be it in real time or turn based games.

The problem often happens in action 2D games and in many 8-directional games (square grid).

But in isometric the problem can be even more complicated as the 2 diagonals of the "theorically square grid" of the "horizontal plane" (X/Z plane), now a Rhombus/Losange grid, actually have 2 differently sized diagonals.

Real Isometric 3D environment lead to some diagonal horizontal (X and Z axis) movement problems : the 2 horizontal plane axis (X and Z) are (visually) diagonals... but the joystick does not use its diagonal to move in X/Z axis. So you have to choose whether you use X=left/Right and Z=up/down or X=up/down and Z= left/Right... (orientation of the joystick to the right or left...)

Some isometric games enable you to move horizontally in 8 direction... such engine often don't manage the vertical axis (jump) and are therefore often 2D.

It is to notice that getting a player go in 8 direction also means that you need a larger set of sprites to display the additional movements, which could be heavy RAM-wise, added to an isometric engine.

You move on the horizontal plan with only 4 directions (X or Z axis), and you can jump (Y axis) to get some platformer gameplay.

The Scenery elements are in "3D" (isometric oriented) but you can't use the Y (3D vertical) axis (no jump), therefore you can move on the horizontal plane (X/Z) in 8 directions.

This leads to a strange and odd sensation as the levels are designed in "diagonals" on screen but the player would instinctively move mostly in up/down/left/right 2D fashion (X+Z axis at the same time).

you can visit CPCpowers to get a list thanks to the "3d iso" keyword.

Here are some limited and notable examples.

(X and Z axis are oblique/diagonal on screen, Y axis is vertical on screen, diagonal ratio for the X/Z plane is 2x1)

A panel of different sort of Mode0 isometric games.

(a narrower isometric, rarely seen on Amstrad CPC, diagonal ratio for the X/Z plane is 1x1, mostly possible in Mode1 unless you use 1x2 Mode0 pixels)

(an even more flattened isometric, diagonal ratio for the X/Z plane is 4x1)

Those can tend to look messy, especially in Mode0.

A panel of different sort of Mode0 cavalier perspective games.

(X and Z axis are both oblique but with different angle = asymmetric...)

Isometric is often used in classic Pixel Art and is emblematic of it as it was the best way to display good looking pseudo 3D FX on old computer 2D systems.

(in opposition to the modern full-real-3D).

This is quite due to the fact that Isometric/Parallel projection was made obsolete by full Real 3D computers evolution, so became synonymous of Old-School Computers and Games

Isometric 3D is still used in modern day, mostly to get an old-styled "Pixel Art" flavour.