Stream2 was an operating system extension for the Amstrad CPC released by the german company Advanced Software Project (Ronald Heitmann and Martin Lancorn) in the middle of the 90ies. It contained a graphical user interface and a new file system called "Prem", which was part of its AMSDOS replacement "MoDOS". One of the most impressive parts of Stream2 was x-Plain, which was a module for rendering very fast vector-based graphics.

Stream2 was called "operating system", but due to the fact, that it was still based on the CPCs' own operating system, it was rather an extension like GEOS or MS Windows 3.11. The advantage of this concept was, that it is still possible to run smaller Locomotive BASIC programs and some of the old CPC software.

A big problem for the success of Stream2 was, that it was commercial software and copy-protected. Released in the middle of the 90's, when most people weren't interested in spending money for CPC software anymore, it hasn't been sold very often. As well as the disc version, there was a ROM version that boots from ROM later on.

The GUI of Stream2 contained most of the usual elements of a WIMP including fast proportional text routines.

MoDOS was a replacement of Amsdos and included a new file system called "Prem". Prem formatted 40 track discs with a capacity of 212KB (instead of 178KB). Similiar to the FAT format it was able to handle sub directories inside an unlimited tree structure. The image below shows the Stream2 desktop, while both drive windows are open. (Left: Prem formated disk, Right: Amsdos formated disk). Files could be copied seamless between the two formats. 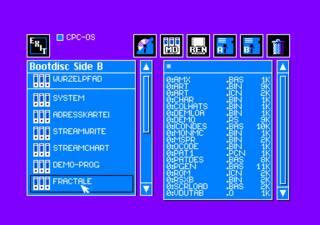 X-Plain was the first and only (?) vector graphic description language for the Amstrad CPC. Like Postscript it was able to define complete printable pages, which could be scaled by any factor. It was quite fast and made true type like fonts possible on the CPC. There was a tool for converting bitmap graphics into vector graphics.

Examples of graphics generated by the x-Plain preview function can be found here: Stream2_Demo