Zub is a platform exploration game in a quest to find a missing treasure through 10 levels of the ZUB-sphere.

Zub, Private Third Class in the second glorious army of ZUBI, was not the happiest being in the ZUB system. In fact, he was terrified. He sat alone outside the office of his commanding officer, Sergeant ZUB. His knees began to shake, a single involuntary tear dripped from his left eye-stalk. If he had had a brow it would doubtless have been furrowed , but he hadn’t, so it wasn’t.

Many thoughts swam around his tiny confused brain. “What have I done?” “Why was I sent for?” “Will I be sent into action?” “Why has he kept me waiting so long?” At this point he gave up, his brain wasn’t really designed for thinking. ZUB was a precision-built, genetically-engineered fighting machine, his sole purpose in life was combat. He was also frightened of dying and had spent the last 478 years avoiding active service. ZUB was a coward. He had a feeling that this period of his life was coming to an end. He was right.

“Ah yes… we’ll see about that. I suppose you’re wondering why I sent for you? “Er…” “This morning” the Sergeant interrupted, “an envelope was handed to me by General ZUB, this very envelope in fact!” The Sergeant waved a large golden envelope under where ZUB’s nose would have been if he’d had one.

“It doesn’t come from the General”, the Sergeant continued. “Oh, no. It comes from the top, from our beloved leader, King ZUB himself!”

ZUB shook his eye stalks and groaned to himself. “Would you like me to read it to you?” the Sergeant asked as though hewasn’t going to read it anyway. “Well…”

The Sergeant opened the envelope and removed a single sheet of golden paper. “It’s addressed to the War Office and it’s written in the King’s own handwriting. It says…

Right you lot stop playing games and cop this. I’ve got a real job for you. Someone’s nicked one of my crown jewels, the green eyeball of ZUB, and I want it back! Prime Minister ZUB tells me it’s been traced to the planet ZUB Ten. Apparently my brother who’s the King of the outfit wanted to add it to his little collection. He sent one agent, a junior officer in his second army, to steal it. I want you to send a similar ranking officer from our second glorious army to get it back. If he fails, believe me, you’ll be sorry!

Yours, The King P.S. Keep this to yourselves we don’t want this sort of thing to get out.” “Well ZUB, do you accept your mission?” “B… but I’m not an officer, Sir”. “Oh don’t worry about that, as from today you are promoted to Sergeant Fourth class… and if that’s your only objectionyou can prepare to leave right away. As it’s a top secret operation you’ll have to use the old teleport network whichhas been closed since the war began. Good Luck Sergeant ZUB”.

Your mission is simple, make your way to the Planet Zub 10, steal the green eyeball of Zub and return to Zub 1. In order to travel undetected you must use the Zub Teleport Network which is no longer used due to the continuing ZubWars.

Each planet has three teleport units which are in orbit, a mile or so above the planet surface. To reach them, you must negotiate a series of floating platforms which can be moved left or right under your control. Each of the three units will transport you to a different planet within the Zub system. It is advisable to make a map of the teleport network.

Each planet is protected by its own fleet of security robots. Some of these are relatively harmless and will merely attempt to push you off the platforms. Others, however, are armed – these should be approached with extreme care. It isrumoured that before the war, at least one of the planets had perfected a prototype “ZIRK BOMB”. If you encounter anything which looks remotely “ZIRKISH” then avoid it at all costs. The effects of activating such a device could be disastrous. The mysterious Zub Zone awaits!

You’re not getting any! Zub is a game of discovery. We’ve told you how to control it and that is quite enough. The programmers wanted it sent out with blank paper for instructions, so think yourself lucky that you got this much!Oh by the way, watch out for powerpills! They have a dramatic library of uses. Some good, some great, some very un-zub! Shoot to use.

Keyboard controls are definable and several joystick types are catered for, follow the onscreen instructions.

To move a platform crouch and push in the direction you wish to go. 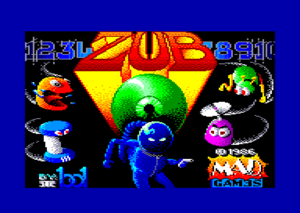 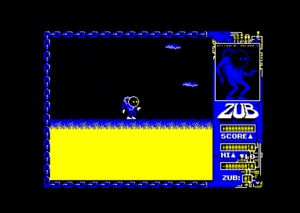 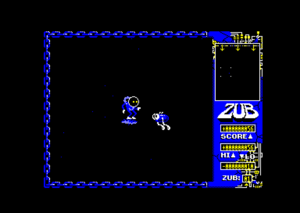 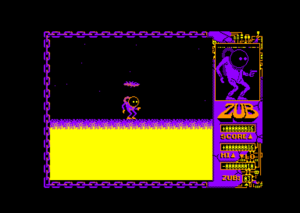 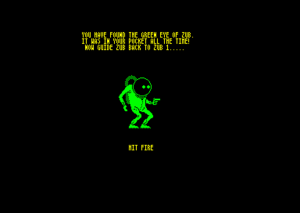 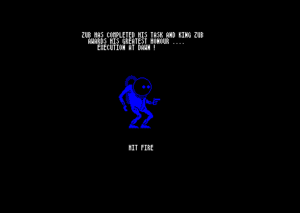 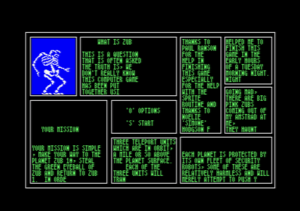 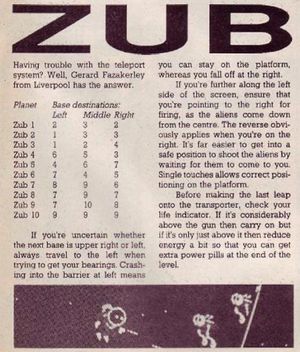 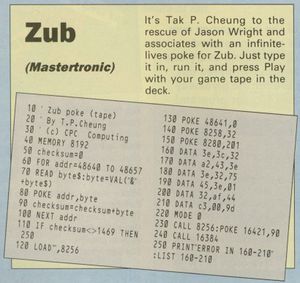 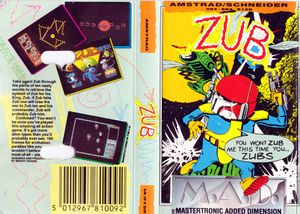 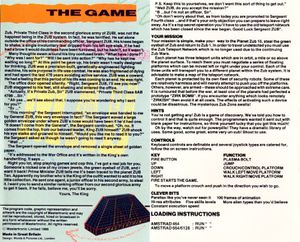 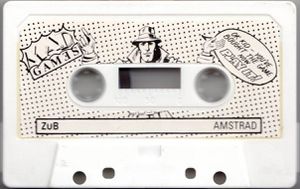 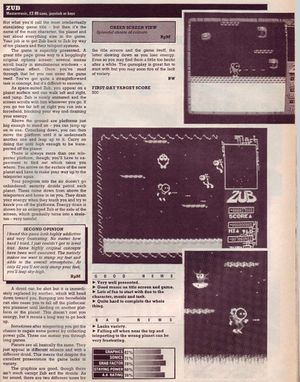 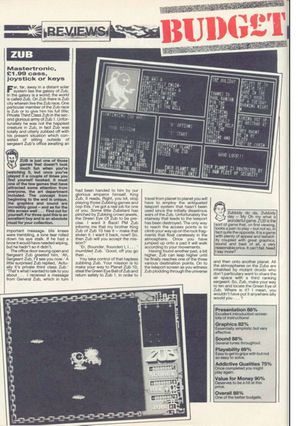