These Floppy Disc Drives are not the original Amstrad standard.

Yet they were far cheaper and are nowadays easier to use.

Especially the 3½" as these disk are still available in some retailers. You can also easily find such drives in any garbage if you properly scavenge old rusty computers.

These Disks couldn't be side switched manually. The older models used only one side (360 KB) Double side (DD) or even High Density were available. 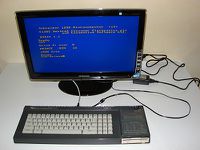 Nowaday, only HD 3"1/2 disk can be found at good old retailer's.

But or beloved CPC can't understand easily the concept of High Density Disk with 1,44MB available...

So you have to cheat : just put some duct-tape (scotch-tape, whatever...) on the HD Hole. Tada, a proper DD disk with 720 KB (if your OS allows it). Or a common 2x178KB with AMSDOS (stock CPC firmware) - if you have a manual side switcher button of course to read second side of disk.

PC users used to do the opposite : file a HD hole on DD disk...this worked well sometimes.

You can also modify your HD drive to behave as a DD one (but this would be permanent of course).. Check for appropriate jumpers on your drive!

A great advantage at the time (in the 80's) was to get access to CP/M sofware library, as most of those were on such Floppy Disks.

Also, those Floppy Disks were far cheaper than the exotic 3", but... few CPC users actually own such drives.

Mostly professionnal users...The common snotling Gamer couldn't even dream of this (nor even knew it possible)... until nowadays.

As the magnetic disk is bigger...well the format is bigger too. It is common to get 720KB disk (using the 2 sides, so 80 tracks)

Many Modern CPC users replace their old 3" with an external 3"1/2, often adding a Disk drive A-B / B-A switcher (allowing the use of an external disk Drive as if it were the internal one = Drive A) and/or a side switcher to allow the use of a 3"1/2 disk like a 3" disk... switching manually the sides as needed by good old 3" disk drives (yet a decent software can do it).

The side switcher and A-B drive's switchers are needed only if you use old software (using AMSDOS), as most of them couldn't really figure they were loaded from B drives, or had no such feature as double sided drives.

They were designed for good old 3" drive so the 720KB DD external 3"1/2 is not implemented.

But modern software designers can allow this fairly easily.

Orion Prime uses the Double side feature, enabling a simple 720KB disk with no manual side switches.

It is up to the CPC-scene to design their software to include those options, allowing more un-modded drives to be simply used as external B drives with no need to add extra buttons and cable assemblies on the Amstrad.

As modifying all the software library of the good old times seems impractical, yet modern era software have to use this.

Amstrad Computer User magazine published a two-page guide on how to connect a 5.25" drive to a CPC 464: