Difference between revisions of "472" 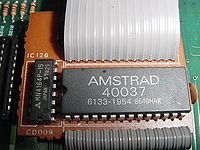 1. Some Spanish companies may have lobbied for a tariff on imported computers, calculators and other electronic machines during the first half of the eighties (*). As a result, the Spanish Government passed an Act (Real Decreto 1215/1985, dated on 17th of July, 1985) that established a tariff on headings 84.52 (calculator and accounting machines, cash registers, etc.) and 84.53 ("automatic machines for data processing", including computers) imported from foreing countries.

According to Sugar's autobiography "What you see is what you get", Amstrad knew very well what was going on. Beginning of Chapper 9: In August 1985, I had a panicked telephone call from Dominguez telling me there was a serious problem, that all computers of 64k and below were now banned from importation into Spain. This was because a Spanish manufacturer was producing a 64k computer and had managed to get the Spanish government to impose a rule blocking all others. This was a disaster for Dominguez and Amstrad – by now we were selling thousands of computers in Spain. [...] Fortunately, the main operating system ROM chip was fitted on the PCB by means of an IC socket; it wasn’t soldered in permanently. I suggested to my people in Brentwood that we design a mini-PCB which would hold the ROM chip as well as an extra single 64k D-RAM chip (and a few peripheral components). I also asked my technical geniuses to come up with some justification as to what this extra chip was doing, rather than be sitting in mid-air going nowhere. They did – but don’t ask me what it was! This mini-PCB, with its additional D-RAM, then plugged into the original IC socket. Based on this trick, it was true to say that the computer now had 72k of memory. We rushed the design of this mini-PCB to Orion. On top of this, we had to change the faceplate on the front of the computer which was labelled ‘64k, as well as all the packaging and the instruction manual.