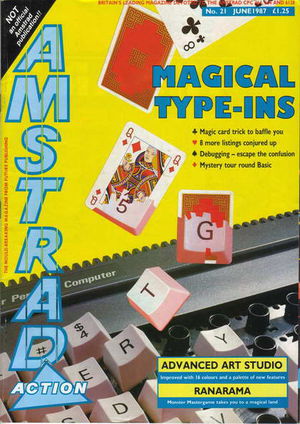 The cover of the June 1987 issue of Amstrad Action illustrates one of the Type-Ins that were published in this issue.

The June 1987 issue of Amstrad Action saw the Type-Ins section advertised on the cover of the magazine for the first time, with the headline, "Magical Type-Ins". The cover is based on the type-in Card Trick by Simon Capp, and shows the keys of a CPC6128 keyboard flying into the air and transforming into playing cards.

This issue also saw some changes to the Type-Ins section. From this issue, a detailed, step-by-step explanation of how one particular type-in worked was provided. The featured program in this issue was Card Trick (as suggested by the cover), and three of the six pages in the Type-Ins section were devoted to examining it. Later issues would refer to this feature as the "Program made plain".

Simon Capp claimed that Card Trick was a "world first" on the computer. However, Amstrad Action published an item in the Amscene section of the July 1987 issue (#22) stating that several readers, as well as the professional computer magician David Hambly, had informed them that this was not the case.

Amstrad Action mentioned that Serpent only works on CPC664 and CPC6128 machines, and suggested removing the extra parameters in the MOVE command to enable it to work on CPC464 machines as well. However, this does not produce the same effect on the screen.

The Akinlawon brothers also programmed the game Astroball, which was published by The Power House in 1988.

A correction to Filecopy was published in the July 1987 issue (#22), which fixed a problem where files could not be transferred between drives A and B.

A correction to Rally was published in the August 1987 issue (#23), which fixed two problems. One of these prevented the screen from scrolling and made the game unplayable, and the other caused the program to GOTO a non-existent line number after the user had completed the game successfully.