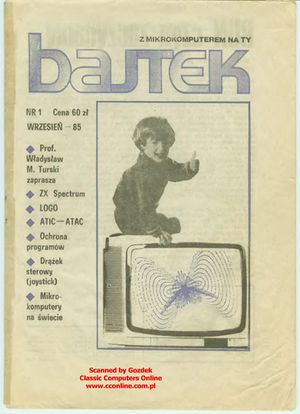 Bajtek was started in 1985 by Władysław Majewski, an editor of "Przegląd - Komputer", which was an insertion added to "Przegląd Techniczny". The first issue would be published by "Krajowe Wydawnictwo Czasopism", but because it was started 'ad hoc', it didn't have paper allowance (Dear Reader, please remember that at this time Poland was a communist country), so it had to borrow paper. The "Sztandar Młodych" (Youth Banner), the newspaper of ZMP (Polish Youth Association - an organ of the communist party for the young communists) decided to lend paper for Bajtek, and the first issue could be printed. It was followed by three other issues during the year 1985 and all 200,000 copies were sold on the spot.

The "Sztandar Młodych" editor liked the idea of a computer magazine addressed at the young computer enthusiasts (rather than at computer scientists - as all other Polish computer magazines, at that time did), so much, that he decided to take it over. 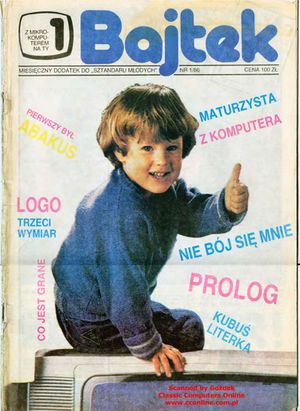 In the fall of 1985, the editor of "Sztandar Młodych" Aleksander Kwaśniewski (who will later became President of Poland) became "minister do spraw młodzieży" (Youth minister? minister in matter of youth? Blah, communistic 'nomenclature' is really hard to translate and my English ain't good too), and his first decision was to make Bajtek a part of the "Sztandar Młodych" publishing house. From 1986 to 1989 Bajtek was published by "Sztandar Młodych".

In the year 1989, thanks to the 'Round Table', there were many changes in Poland. One of the most important was the closing of the Office of Censorship and stopping of the press regulation. With that (and many other changes), Bajtek was separated from the "Sztandar Młodych" and continued on its own, published by Bajtek Publishing House, a co-operative started by Bajtek's redactors. It ran until 1996, when bankruptcy of Agrobank brought Bajtek Publishing House to its knees, eventually bankrupting it too.

By that time, the popularity of the CPC in Poland was rising. That was to the simple fact, that CPCs were (thanks to CP/M+ and 80 column mode) considered a cheap alternative to IBM PC and other 'professional machines'. Personally, I've heard about CPC applications in scientific calculations, which on its own shows how this trend was strong. That was because even institutions (like universities) couldn't allow themselves buying substantial amounts of PCs. Poland was at that time very poor country and high currency exchange rates added to the problem. Also, there was COCOM, which meant that really big machines were out of reach.

Moreover, the built-in Centronics port of the Schneiders allowed very easy producing of so called "publikacje bezdebitowe" ("debitless" publications). "Debit" is a word from French meaning "to sell", "place of selling" and "bez-" is a Polish prefix for "without". At that time, if you wanted to distribute your publication, you had to have a "debit", an allowance from the Office of Censorship. So, in short, "bezdebitowe" or "debitless" publications were illegal papers distributed by the underground political organizations. As they usually were produced in quantities of around 200 copies, a CPC with a good NLQ printer and possibly a copier was all you needed to fight with communism. Needless to say, CPC became quite popular in the underground.