From CPCWiki - THE Amstrad CPC encyclopedia!
Revision as of 12:47, 14 January 2021 by Childishbeat (Talk | contribs) (→‎Mode R: Some context is given so users don't have to go to the Mode R page to find out what it does.)
(diff) ← Older revision | Latest revision (diff) | Newer revision → (diff)
Jump to: navigation, search 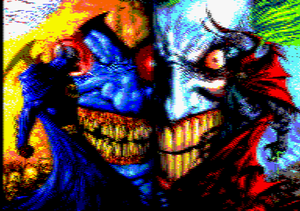 Mode R usage in the demo
This demo uses Mode R, a software video mode designed by Rhino using Mode 0. Via horizontal interlacing, it can theoretically simulate up to 240 colors on screen at once.