Difference between revisions of "CBM" 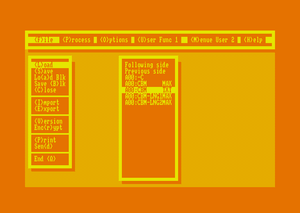 The Command Bar Menu (CBM) is a part of FutureOS. It provides an user-interface for all own programs. You can use hierarchical pull-down menues to select files or functions. Windows aren't used, because windows curtail the usable screen area. The interaction by the FutureOS desktop is done by a function which calls it by using the OK icon.

CBM is not part of the ROM based 64 KB core OS itself. Its provided as Z80 source code that can be used to create new programs for FutureOS. The well documented source code can be downloaded from the official FutureOS-Homepage. Therefore it's possible to adapt / use CBM for any of your self written FutureOS programs.

When using CBM for programs, then these program can have nearly the same appearance. This makes it easy to work with different programs, because the generic appearence is the same and the basic functions are located at the same positions.

Examples for programs using CBM are the MP3-Player, the Sprite Converter GMSK, the map and playground editor GSEd, the sprite manager Kane and some other applications for FutureOS.

The source code can be downloaded from these places: