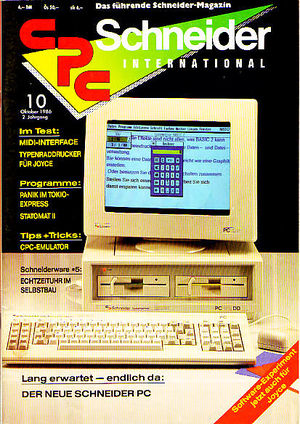 During its life-time, the magazine changed its name quite a few times:

The second and third rename happened after Schneider Computer Division stopped distributing the CPC computers in Germany and Amstrad stepped in. The magazine was named "PC Amstrad/Schneider International" for a short time and to "PC Amstrad International" later.

As of 1991-10, the published decided to drop the PC section and concentrate on the CPCs and PCWs/Joyces only, so the magazine was renamed a fourth and last time: "CPC Amstrad International".

The early years also were the best in the magazines lifetime: The CPC was selling quite well in Germany and as the magazine lived from readers participating (All listings printed were sent in by readers before) there was enough content to print. The hardware and software test sections were well supported by the hardware vendors and software distributors and there were enough advertisers to ensure the magazine earned money.

The magazine was renamed to PC Schneider International to reflect the additional PC coverage inside.

The PC coverage was limited to the Schneider PC1512/PC1640 models (and their matching portables) as well as the PCW/Joyce. The editors were concentrating on the features unique to the Amstrad PCs, e.g. the included GEM and DOS plus. At this time both, the CPCs and the magazine, were still going strong.

The history behind this was, that in 1988, Schneider Computer Division dropped the distribution of all Amstrad computers in Germany and Amstrad opened a branch in Germany.

Sadly Amstrad couldn't keep the change seamless: About half a year, the supply in Germany was interrupted and the shops went out of stock. This was less of a problem if you already owned a CPC, because the supply with games was widely not depending on Schneider/Amstrad and also many add-ons were imported by the shops themselves. However, original Amstrad parts, like the CPCs themselves, monitors, disk drives and so on became harder to get.

As at about the same time new, more powerful, home computers like the Amiga and Atari ST became announced or even available, this was the beginning of the end for the CPC in Germany.

The magazine was renamed "back" to CPC Amstrad International again.

In order to keep the magazine up, DMV tried a lot of things. For example, the printing technology was changed to a cheaper one, the magazine no longer appeared monthly but only every second month and as last resort, they no longer sold it at every newsstand but only at railway station bookstores and via subscription in order to reduce the amount of magazines returned. With the PC1512 and PC6140 becoming more and more outdated and more and more magazines coming up covering PCs only, the editors decided to drop the PC section in favor of the CPC/PCW again.