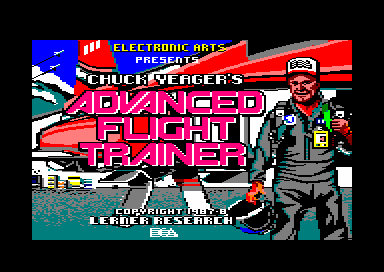 Frame rate is not terrible but could be better. Notice the g-meter in the corner going up and down in the range between +4g and -2g.

Chuck Yeager's Advanced Flight Trainer is a 1988 flight simulator by Electronic Arts for the CPC. Aircrafts in the game include the Bell X-1, the SR-71 Blackbird, the P-51 Mustang, the Cessna 172 Skyhawk, the F-16, and the F/A-18.

Some people consider this the best—or at least most realistic—flight sim for the CPC.[1] The focus is completely on aerobatics, there are no weapons or battles in the game.

The sim has a nasty Speedlock copy protection mechanism that fails with some emulators, so it might be necessary to use a modified version.

The graphics do not work that well on a green screen (e.g. the mountains tend to blend into the sky), so it is a good idea to play this flight sim in colour.

The manual is comparatively hefty at 50 pages, but there is a way to get airborne quickly: Hit Escape, and select e.g. "Location -> 10,000 ft" from the menu. You can also pick a different plane in the menu.

In the faster planes you also have to keep an eye on the g-meter in the bottom right corner of the screen. If g goes too high for too long, the pilot will black out (the screen goes dark for a while), if it goes below -2 or -3, you will get a red out (i.e. too much blood in the head; the screen will turn red).

There are also several outside views of the plane and a flight recorder that can play back your flight later.

Keyboard commands for the Amstrad port are not included in the manual but the quick reference sheet. It also lists some features in the 128 KB version that do not work with the 64 KB version:

Not a particularly great video because he never actually gets off the ground, but at least it shows some of the different camera angles available.