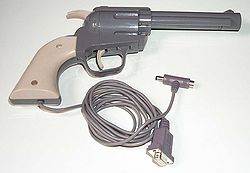 This lightgun was developed by the popular French company Loriciel.

They modeled it on a Western revolver, hence the name West Phaser.

Sadly it was unreleased in the UK but users were able to import it.

An outstanding feature was that the user could program his/her own games for use with the West Phaser Lightgun.