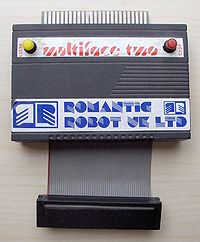 It was such a good idea that at least three other companies had the same plan, and brought out similar-sounding devices: Datel's Action Replay, Evesham Micros' Disc Wizard, and Mirage Imager. In one of those happy coincidences of commerce and merit, the Multiface was the best of the lot, and also the one which survived.

But that only records what’s in memory. The CPC also has a barrage of dedicated chips to control the display (the CRTC), colours and memory configuration (the Gate Array), sound and the keyboard (the PSG), and so on. There is no equivalent of the PEEK command for these chips. So how do you find out what the settings are – what colours are in use, what size and mode the screen is in, and so on?

As said above, the multiface watches the bus for writes to I/O ports, and memorizes the written values (required since most of the Gate Array and CRTC ports are write-only). Reading the memorized values is probably done via these I/O ports:

Writing any value to these I/O ports enables/disables the 8K ROM and 8K RAM in the Multiface. When enabled, the ROM/RAM are mapped to following addresses,

with the internal ROM/RAM at 0000h-3FFFh in the CPC being disabled.

But this ability to edit the memory could be used in a very clever way to enter an assembler program and change the PC (actual executing address) to run it. The most famous use is, arguably, a BANK DUMPING PROGRAM , that dumped the first 64Kb of memory to the second bank on a CPC6128, then reset the machine. That took advantage of the fact that the second 64kb survived a RESET, so all the program was there ready to save from BASIC. The procedure was simple, just entering those bytes in any memory location (not in the 4000-7FFF range):

Once the machine was reset, you could save all the program to basic doing:

This trick was used to save heavily protected games to disk.

Most notorious of all was Elmsoft’s Zap't'Balls. Run it with the Multiface plugged in, press the red button, and you’d get a rather rude message. Ironically, one of the much-vaunted cracks of Zap’t’Balls was accomplished largely with the Multiface’s latterday rival – Siren Software’s Hackit. See BTL 2 for more.

Some programs were written to co-operate with the Multiface, rather than fight against it.

Were all hacking programs designed to expand the capabilities of the Multiface.

The Insider was written by Romantic Robot, while the others were all third party products. The Insider was also unique in that you could still press ‘R’ to return to the program currently running.

There are at least 3 firmware versions. The year & checksum can be displayed by pressing f0 on numeric keypad (within the multiface toolkit main menu). The checksum is calculated by XORing all bytes in the ROM with each other.

You can find more versions (and more info, besides) over at the Grimware site