From CPCWiki - THE Amstrad CPC encyclopedia!
Revision as of 13:30, 14 April 2020 by Nich (Talk | contribs) (Added link to NoRecess' interview and made some grammatical adjustments to article (although more work needs to be done))
(diff) ← Older revision | Latest revision (diff) | Newer revision → (diff)
Jump to: navigation, search 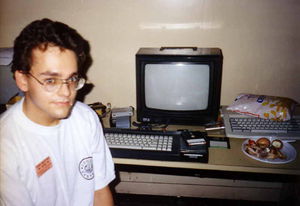