Difference between revisions of "SYMBiFACE II" 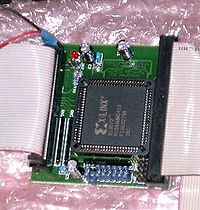 Prototype of the CPC-IDE interface

In autumn 2004 the CPC-IDE was developed by Dr.Zed with support by Octoate, Tolkin and TFM. It is the first hardware solution ever that allowed connection of IDE-harddrives and CF-cards to the CPC with the maximum possible data transfer speed. Technically the CPC-IDE interface was based on the GIDE IDE interface by Tilmann Reh.

It was fully working, but still had a prototype state, so only 10 pieces have been produced.

During the production of the CPC-IDE Prodatron joined the team and created IDE-support in SymbOS for FAT16 and FAT32 harddiscs until Xmas 2004.

After working successfully, Dr.Zed and Prodatron made plans for a second version, which includes a lot of more extensions. So the SYMBiFACE II is not only an IDE interface anymore. It merges the CPC with current PC technology.

CPC SYMBiFACE II contains the optimal solution for connecting a CPC with an IDE harddisc. It provides the maximum - both for the performance and for the simpleness in accessing the harddisc.

SYMBiFACE II includes a rom manager software, which runs under SymbOS. This tool is needed for displaying, loading, saving and deleting of the 32 x 16K ROMs.