Difference between revisions of "Star Sabre" 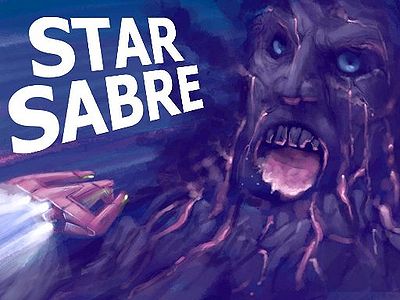 A Shoot them Up game by Paul Kooistra (AKA Axelay).

2384AD. Mankind has extensively colonised several hundred planetary systems after the development of a space folding drive. While the ruins of extraterrestrial civilizations are discovered, they have all long since passed into history. Humanity finds itself alone in the galaxy, with no option but to pick over the bones of these ancient otherworldly peoples, in order to learn about them, and why they disappeared.

On a routine survey mission at the edge of explored space in your S922 Sabre scout craft, you briefly pick up a distress signal from a nearby Xeno-archaeological site. Locking in the coordinates, the folding drive kicks in and delivers you to a scene of devastation! Vessels of unknown origin are raining destruction upon the outpost, so while it appears mankind's isolation is at an end, it seems the task has fallen to you to blast these new galactic neighbours into the history books!

A 128Ko ram version of this game was also released in 2009, published by Psytronik Software.

Axelay (AKA Paul Kooistra) has teamed up with some of the best current CPC coders (Targhan, Sylvestre/Supersly/les sucres en morceaux) to bring this 128K update to his already very good game Star Sabre. The extra memory has been used to add more enemy sprites, a wonderful soundtrack and extra levels! Even the title screen and ending sequence have been improved.

An introduction to shoot'em ups on the CPC

You may also download the latest 128Ko RAM version and latest news or productions there : http://starsabre.bigblog.com.au/gallery.do?type=detail&id=176765