Difference between revisions of "Stranded" 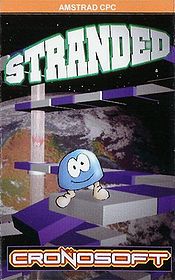 Stranded is a puzzle game that was originally written by Bob Smith for the ZX Spectrum in 1989 and released by Cronosoft in August 2005.

Kevin Thacker converted the game to the Amstrad CPC, which Cronosoft released in May 2006.

In the game, the player controls a mushroom-shaped alien called Moosh, who must be guided through 32 levels consisting of a grid of tiles.

When Moosh walks over a tile, it disappears, so he cannot retrace the path he has taken.

All of the tiles that can disappear must be removed from the screen in order to progress to the next level.

The game features a password system that allows you to skip levels that the player has already completed successfully.

This game has now been released (Dec 2009) for free download.

You are free to use these games on an emulator or write them back to an original tape or disc, but you are not allowed from selling these versions.