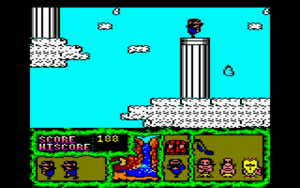 Professor Eyestrain disappeared twenty years ago when the scientific world pooh-poohed his idea of a giant asteroid colliding with the Earth. Now the asteroid has appeared again and only Eyestrain has the solution to destroy it.

Choose one of five intrepid explorers and set out with your party of bearers around the land-scape in the search for Eyestrain. Eyestrain will ask for various items from your bearers in order to create an Asteroid deflector. You can collect previously abandoned items from other expeditions by walking over them. Once held by a bearer you can use the article when-ever you need to.

Each character has a key item which he will need to complete the mission. Your character will obey all your instructions, even stupid ones, although this may lead to some head shaking!

When stuck, the character may have a bright idea about which item to use or then again he may not.

Spectrum 48k: Load "" and press PLAY on tape. Stop the tape after the Explorer Selection Screen and restart once you have selected your explorer.

MSX 2: Disconnect drive from system, set width of screen to 37 characters and type B LOAD ‘CAS:”, R and press PLAY on tape.

Its my very favourite game, plus its very easy to complete it. Basically, all you have to is collect / use all the items as shown in "Various Items" section, and after that, you'll have to find Professor Eyestrain, which he will ask you six various items in order to create an Asteroid deflector (pinball mechanism) as follows:

After you have given the six items that the Professor Eyestrain asked for, you'll see a rock bounced from the lever, and your score will be 2350 and that will be recorded as High Score.

Here's how I got the High Score of 2350 using Character: Fortisque Smithe

Congratulations!! Helping Professor Eyestrain to save the earth providing him with the items to make a pinball mechanism!