As a Colour Personal Computer, perhaps the Amstrad CPC best argument (beside being cheap, fully equipped and well rounded) was it's video capability. Yet this was also more demanding for the Z80 to handle compared to other lighter players such as ZX Spectrum.

Also Amstrad's Video RAM was shared with the Z80 RAM. This and a cheap concept with fewer custom chips to ease the CPU could turn it into a sluggish snail if badly programmed.

Yet colourful games with few scrolling requirements, reflection games such as KLAX... were perhaps the easiest medium for a CPC to shine above other 8 bit computers.

Too bad too few graphically-heavy Role-Playing Games were produced.

The Video modes are known to display pixels with different sizes.

Basically, the Amstrad CPC Video works like a CGA video card from a PC. But extra features like a 16 colours mode exist.

The dimensions in pixels given could be raised with clever use of FullScreen Trick (often dubbed erronuously as "overscan mode".)

This then allows with a video memory of 24 KB (approximately) to displays on the standard screen up to :

Also the use of scanlines to increase vertical resolution is not "easly" possible on Amstrad CPC.

When dealing with Full screen on real Hardware, the vertical limit of 256 pixels is the "safely displayed zone". As the actually displayed zone may vary depending the time your monitor ran (warmed ?) or from individual hardware to another. The same goes for horizontal diplay as we deal with old electronic.

The Amstrad CPC is perhaps the only cheap personal computer of this generation with absolutely no such thing as (character) colour attributes.

Speccy was awful for this, and even better computers had modes with it.

Yet the use of "Raster colour changes" can actually produce horizontal colour clashes if an animated object is to cross the 2 zones and the colours choosen badly/on purpose (or in 2 coloured mode2).

Such effect can almost be seen in the game Striker in the Crypts of Trogan when monsters cross the "rasterzones"...

C64 and MSX also had Colour attributes, yet also some modes without or with less limitations than Speccy, and later models (C128, MSX2+ and 3) were also designed with even better extra non-attributed modes.

As a result, an Amstrad never sees any faulty colour clashes... despite the numerous speccy ports, because it cannot unless voluntarily programmed.... This saved many speccy ports indeed.

Is this better ? Well colours attribute system allow a good resolution with more than 4 colours displayed on screen with little effort.

So this would be interesting to display...colourful texts.

Yet fine graphics with a really colourful feeling become harder to get, so are nice metallic or graphical effect letter fonts with 4 colors...

3-level RGB of the CPC

The Amstrad CPC (old) palette features 27 colours, despite the fact that the Video system (Gate Array and CRTC) could actually handle 32 colours.

This is a 3-level RGB custom palette.

It is Cubic, generated by "Trigits" (ternary digits)

The 3-level (not bits) RGB uses three level for every red, green and blue color components, resulting in a 33 = 27 colours palette.

A notable specification of the Amstrad CPC palette is that it offers only one "Grey".

This explains why in some games rocks and stone are coloured in other shades to get a good colour layer with more than 3 shades (black, grey and white).

It is also notable that this palette has a "lot" of Blue and Green variations... It is possible to use a mode 0 screen with almost only 16 pseudo Green and Blue colours (yet a bit purple for some of them).

Many graphic programmers used mostly coloured flashy bold colours as it was often reproached by other 8bit fans (C64...).

But a clever choice in said colours could also give good results too in Pastel shades.

Yet Amstrad CPC had clearly a better palette (in number) than Speccy, C64, or almost all post-1985 8 bit computers.

It is somewhat a bit of a shame that some of its colours are quasi-identical...

This is a palette that was often badly used because of the crossdevelopment in games industry.

A lot of Graphics ported from C64 or Atari ST can't be ported without a heavy job on the ink-colours selection or even a complete re-work of the pixelisation or composition.

By the Way good old 80's electronic device such as Amstrad CPC wasn't that precisely set... if you measure the actual value, you may get far different result from individual machine to other.

The Amstrad PLUS range is also unable to accurately emulate the half value...

And 15 cannot also be divided by 2 unless rounded.

That's the Specificity of Amstrad CPC's Ternary digital system... Binary digit cannot produce this... but 1/255th is certainly close enough to get the eye to not notice.

"White" is actually grey while "bright white" is white...

Cyan is quite mixable with blues, and lighter Cyan are also lighter blues.

Anyway, the CPC palette actually covers a complete RGB cube... Yet in a simplified way. Per exemple an unsatured "Brown" would be a cross between Orange and Black/grey/white... Yet the CPC has only one flashy medium Orange.

Yet this can be used for a more subtle approach, and yellows actually mix well with some "Greens" 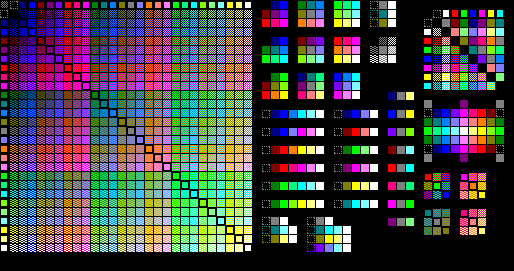 It is to notice that if the Amstrad CPC could have a 320x200x16 mode... the dithering possibilities would have been quite awesome, and the palette would be more than well exploitable on the best 8bit Graphic machine...

As shown... the CPC original palette is good as it enable gradiants in Black and White + 3 shades for the 6 basic colours...

Added to those, there are a few special crossbreed colours such as "Mauve" (2 shades : Mauve and Pastel blue), orange (can mix with red and yellows), "Purple" (a bluer Red) and a lot of "light greeens" (turning into Cyan or yellow).

Yet those are saturated colours, not fit for Greys or Brown spectrums as the C64 palette was. still great for comics styled graphics.

The Amstrad's "grey" (Real name = "White"... or dark white in opposition to bright white) is used as background. It is not shown on the cubes because it is supposed to be "inside" the cubes.

With a certain limit and providing the use of fine regular dithering, the RGB cube of the Amstrad CPC can be stretched into bigger RGB cubes.

Such cubes are also a guide to get the smooth gradiants from one CPC colours into another.

This is the CPC palette stretched into a R2G2B2 cube (bits, not values) with help from dithering, hence giving 4x4x4= 64 colours. Basically the MS-DOS era IBM PC EGA as availlable on Amstrad PC1640

This is the CPC palette stretched into a R5G5B5 cube (values, not bits) with help from dithering, hence giving 5x5x5 = 125 colours.

Notice how some colours can be obtained with up to 4 different combinaisons, yet with the same result. But when considering on screen pixels reactions, notably during flickering technics, some combinaison may be better than others in order to reduce the flash effect of the flickerings.

Bigger RGB cubes would need the use of unpractical ditherings (other than 50%) and perhaps mix of more than 2 colours. This would simply not work properly. 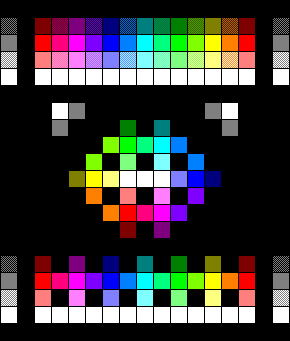 This kind of picture can be obtained on a real CPC (through mode0 and Rasters) in order to test the monitors, and also to understand at first sight how the Colours logic works.

Used by the Amstrad Plus series.

Systems with a 12-bit RGB palette use 4 bits (16 values) for each of the red, green, and blue color components. This results in a 163 = 4096 colours palette. From the 8 bit era, only the latter MSX specs had a greater palette (in number).

This places the Amstrad plus range at second place in palette capability in 8 bit computers area... Bested only by MSX 2+ and 3 series, and alongside TO8 thomson's computers...

Maybe the NEC PC Engine console was also better...as it had a 16 bit video co-processor...

Needless to Say, the Amstrad PLUS has no problem to display proper colours when dealing with adaptations-ports from C64 or Atari ST but the resolution need some work (mode0 means wide pixels).

Mode 0 graphics are blockier thanks to the "2x1" ratio. Yet the high amount of colours allows the use of Anti-Aliasing technics to soften the shapes.

It is the mode that made CPC a Colour Personal computer.

Dithering is sometimes used in this mode, yet the high number of colours allows better colour layers.

Few games on CPC werein fact C64 ports (graphically, indeed) as the C64 did had such video mode as the Amstrad's Mode 0... But Hardware Sprites capabalities were even more used... Also because the C64 did had less coloured palette,n and a lot of grey... the graphical results were quite different.

Yet the games area was often smaller than average...

The pixels are square, but the only 4 colours are a bit... few. Yet a massive amount of horizontal "split rasters" allows you to multiply the number of colours displayed on the screen.

It's like using the colour attribute specification (as on ZX Spectrum) but with horizontal limitations.

Pictures and graphical materials have to make good use of dithering in order to get a realistic look, yet the square pixels allow smooth dithering, and the absence of colour attribute system permit really interesting stuff compared to the humble speccy.

The pixels are 1x2, extremely slim. This mode is difficult to use in a coloured way.

Better used as a Text Mode, yet it can be included in a split screen (games).

You have to dither a lot to get a good picture as there are no real colours shades.

Thanks to Mode 2 full screen capability (the so called "overscan")..., the Amstrad 8 bit computer was perhaps the one able to display the higher resolution in the 8 bit range...

(just have to see what Thomson's computer could do in full screen...and scanlines modes too on other systems...)

The border allows 1 additional colour to be displayed on the screen with no tricks, as it has its own ink..

This means that having a borderless picture/screen ("overscan full screen"... sort of) actually removes one possible displayed colour/ink.

The Amstrad Plus display the same modes, but 15 more colours can naturally be displayed thanks to the Hardwired Sprites.

This means 32 colours per screen with no tricks (including Border).

Also it is worth noting that the resolution of these Sprites (16x16 pixels) can be displayed through "magnification".

This can be multiplied by x2 or x4 in both dimensions (X and Y).

Some odd and obscure "software video modes" can be achieved through the use of various tricks.

Wikipedia's page on the different 8 Bit systems Hardware Palettes and Modes including amstrad CPC of course...

Wikipedia's page on RGB palette including Amstrad CPC specific one

Les Sucres en Morceaux the French site from supersly, shows many examples and techniques to use the different Video mode of the amstrad CPC.