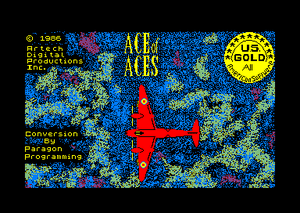 For the CPC, this game was also available on the Solid Gold compilation, together with Winter Games, Gauntlet, Infiltrator, and Leaderboard.

All in all this is not a very good port though; the MODE 1 graphics are fairly slow and ugly and the sound effects are not that great either. Rescue on Fractalus! uses a similar approach to terrain rendering, but is otherwise a far more fluid and playable game than Ace of Aces. (Actually, what looks like mountains in the CPC version are actually supposed to be cloud tops, but you cannot really tell at all. They are easier to identify as clouds on the C64: white and nicely rounded vs. green and pointy.)

Also, the cockpit instruments get damaged very easily by enemy fire in the CPC version, making it difficult to complete a mission if you do not know where you are heading. The C64 version seems to be a bit easier in that regard.