THIS PAGE IS UNDER CONSTRUCTION 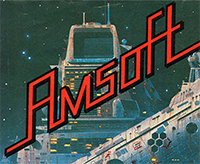 Amsoft was the software wing of Amstrad set up to provide an initial infrastructure of software and services for users of Amstrad's range of home computers. Founded in 1984 Amsoft not only published software for the CPC but also created the Amstrad User Club as well as Amstrad Computer User.

As part of their role as the CPC's press relations and consumer promotions division Amsoft released software catalogues showcasing available and upcoming software as well as hardware. Each item contained a brief description as well as a the name of the publisher, software number and if applicable whether the software used a keyboard or joystick or combination thereof and if it was on disk or tape. Each item also contained a screenshot though sometimes Commodore screenshots were used.