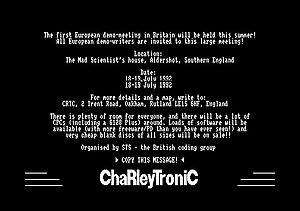 CRTC Message Demo is a Ghostwriter-like demo by ChaRleyTroniC, intended to promote a putative demo meeting in the UK in July 1992. (The code was the same used by ChaRleyTroniC for sending messages to various contacts.)

The meeting was to have been held at The Mad Scientist's house in Aldershot, UK. However, a lack of interest eventually meant that it was replaced with an STS meeting at Hangman's house.