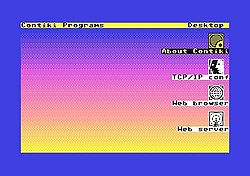 Contiki running on the Commodore 64

Contiki was designed with very low hardware requirements. And can run on a unexpanded Commodore 64. The portability is ensured by the core being written entirely in ANSI C. 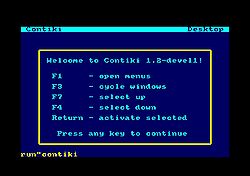 Contiki running on the Amstrad CPC

Previously there have been attempts to port Contiki to the CPC. The most successful port was done by Kevin Thacker.

This was accomplished by:

The nature of Contiki (written almost entirely in C) and the poor Z80 optimisation by the SDCC compiler makes Contiki slow compared to other operating systems. The desktop routines in the Amstrad port relies on the slow firmware routines because it was quicker to make the port this way.

The Amstrad port runs in 64k. It doesn't make use of any extra RAM, this choice was taken so that a quick port could be done to proove it was possible.

A key feature of Contiki is its ability to access networks.

Two reasons prevented this in the Amstrad port:

The linux machine would effectively become a gateway and would pass information to/from the CPC through the serial connection.

However, because the Contiki programs could not all fit into ram, this plan was shelved.

The Amstrad version is based on Contiki v1.0.

Other Operating Systems for the CPC