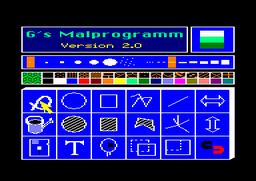 GPaint was popular in both Germany and in the United Kingdom, where it was adopted gleefully by many PD libraries.

The software listing for version 2.0 was printed in the German magazine Schneider Magazin in issue 08/1988 as a utility for the also printed instruction for the Atari-ST mouse adapter of issue 07/1988.