The history of CPC Demos

As a teenager living in France during the nineties, I was naturally reading local press dedicated to the Amstrad CPC. One magazine in particular, Amstrad Cent Pour Cent, had huge impacts on me at the time. Things were presented unlike any other magazines : it was entertaining to read with its open-minded approach to talk about everything dealing with CPC. More especially issue 47, that presented an article dealing with the history of CPC demos - from the very first demo to the date of article release - 1993.

Below content originally written by Slash/Logon System in 1993 and published in issue 47 of Amstrad Cent Pour Cent, translated to English by NoRecess.

Demos have been, for years, the ultimate weapons of skilled programmers. To be recognized within the CPC world, sometimes the only thing to do is to create a single but killer demo. For newcomers in the computing world, I precise that a demo is a program that basically does nothing, excepted the fact to visually impress you. The more technical tricks are involved, the greater impacts on the demo-watcher. Basically, demos's aim is to glorify a particular member of the demo-scene, or a complete demo-group.

We selected, through this article, a representative sample of this wonderful world. Please also note that most of those demos are available on http://www.cpc-power.com and http://www.pouet.net. 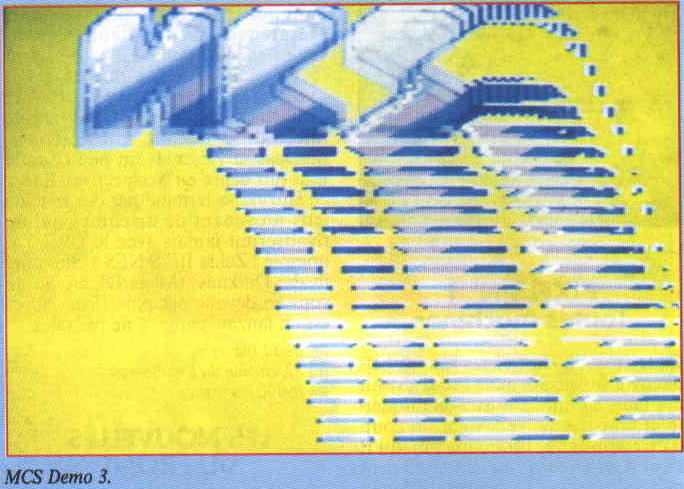 Everything started in Germany with MCS and his MCS Demos, that raised up big interest for many people. After some spheres that went up and down through the screen while modifying background's content (a judicious color-cycling effect), we then had a huge bouncing MCS logo in a later part. As you may realize it, it was already not that bad for the time, and he did much better in the following productions. We had, for the really first time on CPC, effects made of rasters. Of course, nowadays nothing is extraordinary about this, but at the time - it was completely amazing to get more that 16 colors in a logo !

MCS did many more demos that, to be honest, did not give anything new to show. At the same time of MCS's glory, a Danish demo-maker, JLCS, showed us other CPC abilities, with an impressive usage of CRTC's register 2 that allows to a logo, if well designed, to give the feeling to be floating through the air. 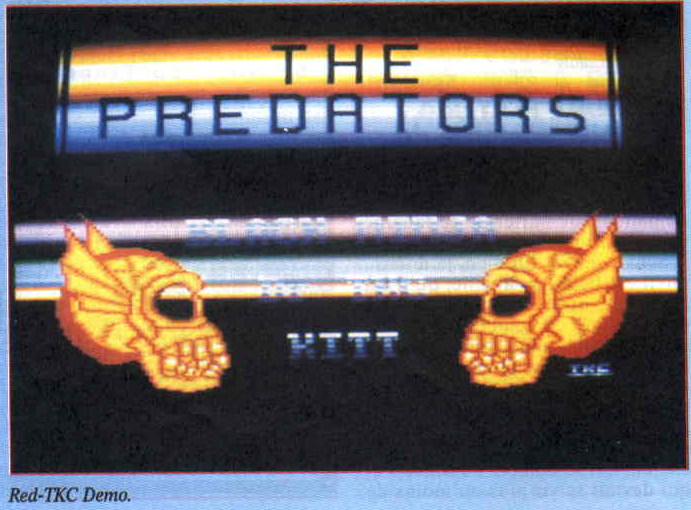 True fact : the first ones involved with demos were the Germans.

But Frenchies, even if they usually don't have any original ideas, they do not hesitate to catch the bandwagon and invest working hard to improve themselves.

First honorable demos were the ones of Fred Crazy and Dr TKC. Together, they designed some nice gems for the time. Their last co-creation was Fred-TKC Demo (original article had a typo: Red-TKC demo). That one put on the table some new technics we could never be aware of (at the time on our machines). In this demo, Dr TKC did an horizontal hardware scroller ! It was quite fast (2 bytes per VBL) but had the merit to be one of the first.

It's kind of sad that Dr TKC left off the CPC after that, because his work presaged a new era inside the French demoscene. 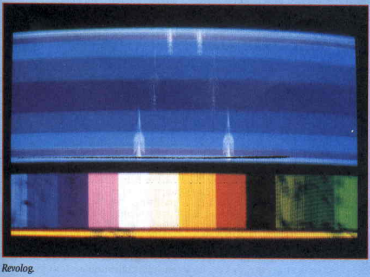 Let's note our friend Longshot introduced ST tunes conversion to CPC, but not only that. Before the Longshot Demo and Revolog, and times before Titus with Crazy Cars 2 game's intro, he did use an enlarged screen (technic called overscan) in one of his demos. It's funny to note that overscan, so simple to implement with our poorly-featured Amstrad CPC, is so complex to implement on Atari ST, despite the fact of being a 16 bits computer.

DRINKING WITH THE MALIBUS 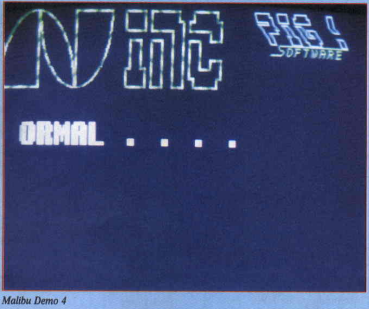 At the same time of Longshot's early work (we can not yet consider Logon System as a team, since it was made of a unique member then - like everyone else !), the Malibus Crackers demos were released. Even if their work was not that impressive regarding the other demo-groups of the time, they acquired a privileged status thanks to their Malibu Demo 4 demo (Naminu, main programmer of the group, joined Logon System few times after). In this demo, we had the opportunity to discover an overscan-formatted screen with a scroller moving through all the screen, that made also use of another parallax scroller, the whole thing enhanced with multiple video modes on same unique screen, and so on.. 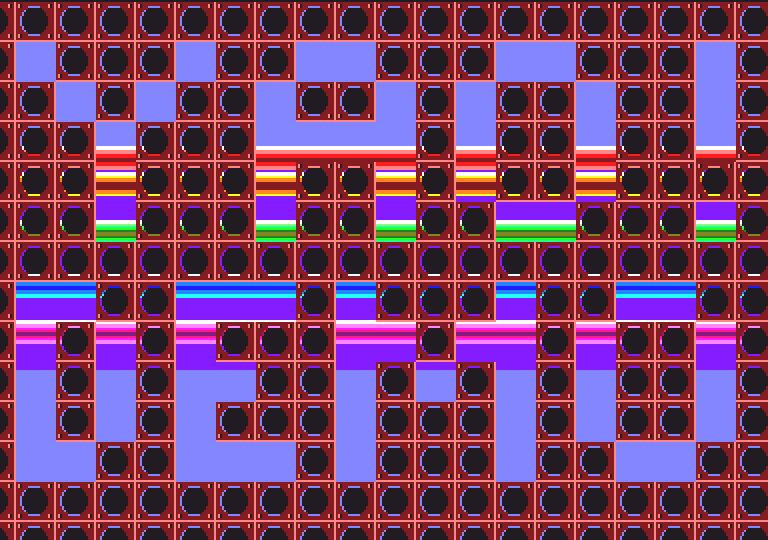 Still at the same time, an other programmer made a name of himself: Fefesse. His first very interesting demo was a demo with a sinus scroll. It's easy to state that his programming skills were still weak, since the demo was slowing down when music was switched on (that said, we are remained friends). I admit most of the persons fall in love when watching his gem (Robby will not clam the reverse thing, he was never tired to listen musics in the demo !). After this initial work, other productions followed, and notably the famous Yao Demo. This demo featured balls moving on top of a perspective chessboard with both hardware vertical and horizontal scrollers, everything tied into same screen ! Since the beginning on this article, I did not mention content of scrollers in demos, but for the Yao I will make a quick exception : this one started a conflict between Fefesse and Longshot (almost as destructive as the one that will later oppose the Frenches versus Germans). Of course, it all about kidding, but it's funny to realize how a pea can suddenly grow up as a soccer ball ! 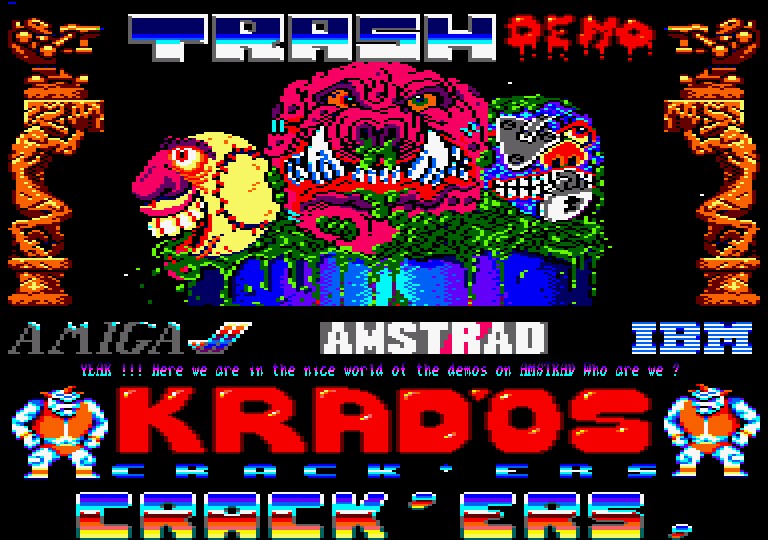 We just can't ignore another pioneer of the demo on CPC : the GPA team. While their demos were not cutting-edge for the time, they made a Mad Sinus Scroller that was able to work on a stock 64Kb CPC machine, while the one of P007 was only able to work with 128Kb.

Also, the Krad'os Crackers proposed, with the Trash Demo, a gem with fantastic graphics. M. Zebigboss (the visual artist of the group) realized splendid mad-balls. The programming-side was also very good, since Mister Plus implemented the demo in overscan, with a scrolling in mode 0, a writer in mode 2 using plenty of rasters inside. 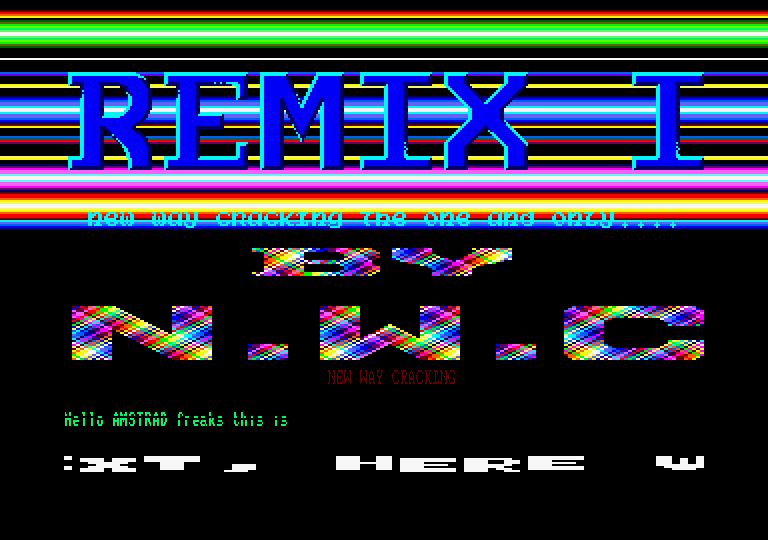 At this time, the 2 main challengers in the course of the best demo were France and Germany. But Denmark entered the challenge too and actually represented a terrific player. NWC (New Way Cracking) did, before everyone else, a demo that was (in my opinion) THE demo on CPC. It proposed a remix of the best CPC musics.

On top of that, he filled the whole screen with tons of fantastic rasters, and impressed people with an hardware horizontal scroller (once again, before anyone else - but I can't prove it, since announced dates looks a little bit unrealistic). 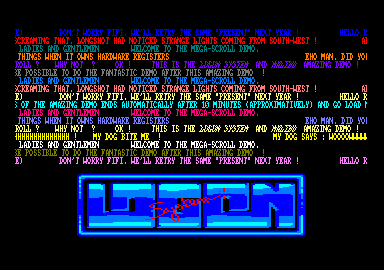 The Amazing Demo by Logon System

Let's get back to France. I was mentioning above the time where Naminu left Malibu Crackers to join Logon System. The result of this association was a true revolution for the time : The Amazing Demo was born. This one, that was filling a complete side of a 3" disc, was presenting things completely new for the CPC. We were in front of full-featured hardware demos, with tens of scrollers in all directions, but also (and that was truly amazing) a music transferred from Atari ST (ok, I know, Longshot already did it before, but waaaiiiittt the best is coming !) that was using true samples for the really first time. While the CPC's sound processor was playing the music, the CPC was also playing samples from times to times. Nowadays, this becomes a usual thing since some German coders did the same by using samples to simulate a battery (the so-called digidrums !).

I recently heard an Amiga music on CPC. Yep, you read it right. Amiga. You should be thinking Logon System did it, or some German guys... all wrong ! CJC from CCC did this exploit before anyone else. This fanzine maker succeeded in what most of famous groups were about to complete (according to what those groups were claiming). But CJC did it first, too sad for them. 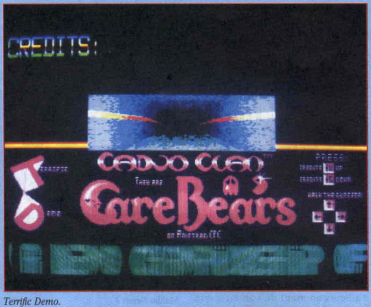 Then The Demo got released. No need to describe it anymore, since it has been largely exposed at the time by all writers of this magazine (it's true fact they received a tiny gift from Logon System for good reviews...).

After that, Terrific Demo was born, made by a bunch of inspired German people: Thriller, BSC, MCS, Whee... a killer team, to round up the thing. This mega-demo added some interesting ideas. For example, menu was not a text pointing to a part, but a small labyrinth where the user had to move inside and find doors corresponding to a dedicated part. Also on the topic of good ideas, Whee created a very great part (to me, the best one of this demo) that, while playing a self-made music with digidrums, was displaying a giant horizontal scroller with tons of rasters inside. As shown in the above member-list, an uninspired MCS was also participating to the demo. 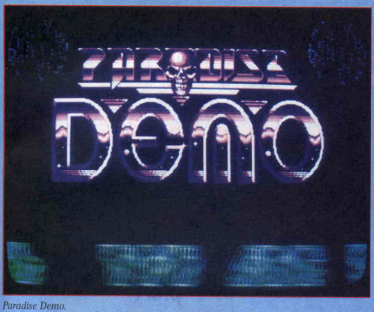 Another megademo that made itself a name was Paradise Demo from Paradox. This demo showed us a new side of demo-making. It proved that, without being gods of programming, it was possible to create something very interesting.

It contained a menu, made by Gozeur, that was looking more like running simulation than a simple menu. To select a part, we had to move a knight that was moving through a medieval set (all using hardware scrolling). Also, parts reached interesting level. I particularly enjoyed the one called Pix Time, that showed a square made of dots (pixels) moving in 3D (all axes). Another gem was the one called Artificial Paradise from Syntax Error (GPA). This part featured a sinus scroller, as also a wonderful scroll following a circle path. It worth to mention that some parts were highly inspired by other demos (the giant vertical scroller looks like the one from Fred Crazy in The Demo)... but who can claim to discover everything ?

GERMANY BEING BACK ON TRACK

Another impressive demo was KKB First, a German demo made of two parts. The first one, which is actually just an introduction, features overscan, with tons of synchronized rasters, with a pleasant music. But actually, the interest remains in the second part. It features an impressive number of scrollings, rasters and music. Everything fitting in only 64Kb of memory. It was very good-looking, which is usually not a standard with German demos (as for the technical side of things, sadly).

ECSTASY HAS A NAME 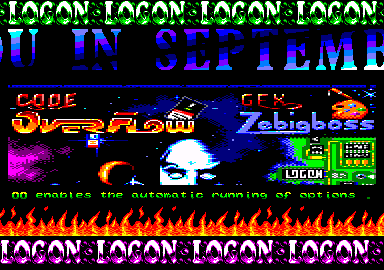 Another living god gave us light and showed things like never before : Overflow from Logon System, of course. He created one of the most revolutionary hardware techniques on CPC. With his S&KOH demo, he demonstrated that CPC could move 2 huge bobs (spheres) vertically (each bobs being huge sprites with a width of half the screen). But it was not enough, the main part featured a fantastic hardware scroller, some Logon logos moving in front of a fixed background, and, most impressive, a wonderful bitmap displayed using a roll with variations.

BEST OF THE BEASTS 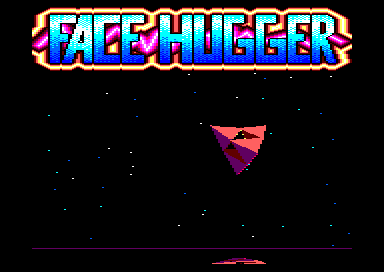 I think that, but this is only my personal point of view, the best demo for now is the Face Hugger Ultimate Megademo. You may think this is the one displaying the maximum of hardware scrollers at same time, or that it features tons of sampled musics... well, actually not. But we would never figured out that CPC was able to manage true 3D. Not 3D with simple dots, but some real complex objects using vector-balls, 3D cubes, or ships coming out directly from Stars Wars movie and the likes, and featuring flat triangles (not wireframe)... impressive.

Written in French by Slash/Logon System

Translated to English by NoRecess/Condense