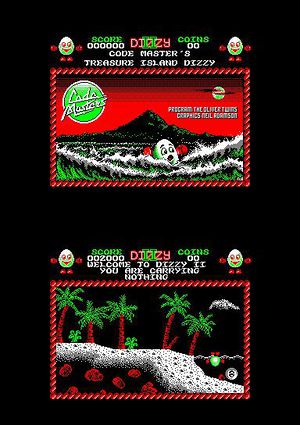 Dizzy was looking forward to the round-the-world cruise he'd booked for.

When he told the other Yolkfolk about the good deal he found, they wondered just what lay ahead of him...

Dizzy enjoyed the cruise at first although there were far too many pirates on the ship, the Grog was watered down, and he didn't even know what a mainbrace was, let alone how to splice it!

The captain, Long John Silver, was a lovely old bloke with a kindly manner, good at insulting and degrading the fare paying punters.

He was well balanced - he had parrot on one shoulder and a chip on the other - and he had a wooden leg which he acquired when he fell out of his pram when he was a kid.

Anyhow, their quaint little man o' war found itself in still waters one sun-soaked afternoon, and Dizzy thought he would organise a game of cricket on the aft deck.

In a fit of blinding stupidity he used LJ's spare leg collection as makeshift stumps, and when they were lost overboard he was made to walk the plank!.

That was how he came to find himself gently poaching on the silent, sun-kissed beach of a seemingly deserted island...

He had to somehow find a way back to the Yolkfolk and lodge his compensation claim with the travel agent...