VideoMaster was (at the time) the best video modulator ever produced for the Amstrad CPC.

The video master doesn't have a video input so doesn't have the capability by itself to create titles for videos - it was planned but it was never made - so to do that you would need to use a program on another computer which allows mixing more than one video source.

Made by Campursoft Designed by Steve Hammond.

The following are my experience. It is worth pointing out that all the equipment has aged and that I may not be using the most optimal cables and compatible display.

On a modern flat screen LCD television the image quality from the Videomaster is worse than the SCART cables you can buy and worse than a native green screen or colour monitor. (This is using a composite to SCART cable).

Mode 0 is fine, mode 1 is useable, but mode 2 is hard to read. This is down to ghosting in the image. With the yellow on blue the ghosting is black. I (arnoldemu) have seen similar when using the SCART output from a KC Compact on a television. I believe the modern televisions are much less tolerant, so it may be that the signals are not acceptable to the modern TV.

The colour reproduction is good although bright white is a little dull for me. My television also has trouble with bright green in that there is visible moving dot crawl around the edges. There is also some noticeable banding between main display and border when the border colour is different from the main area.

Like the SCART, register 3 scrolling can be used (use values 5/6 for hsync length - any lower and the picture loses sync), and like the SCART if you try to use lower hsync lengths and if the border is not black then the main display will become darker.

It has also happened that when I program the sync so that the television can't accept it and then re-program it back to the default the picture is black and white with noticeable dot crawl all over it. I don't see this with a SCART cable.

On a Sony Trinitron 14" CRT television the image is much much better. There is much less ghosting and the image is brighter. Mode 0 is good, mode 1 is fine and mode 2 is readable depending on the colour choices. If I set mode 2, set the background to black and the text to bright white I see multicolours moving through the text but it is still readable. The trinitron television accepts shorter hsync lengths, but at 4, the image changes colour with the Videomaster. Restoring the hsync length doesn't work, it remains at the changed colour and I need to power the computer on/off to get the colours back. For some inks the text appears thinner, for other inks it appears fatter. In terms of image quality with colours, green is best, then red then blue.

With a composite cable the image quality is a little bit better than with the SCART cable but still some ghosting remains. Turning RV1 or VC1 doesn't remove it. However turning VC1 stops the multicolours moving through the text and it becomes much more readable. In mode 2, bright white on black is readable and useable. The colours less than 13 however are difficult to read.

Turning L1 doesn't seem to do anything.

The PCB is single sided. 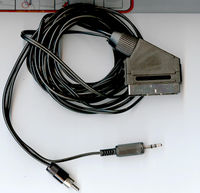 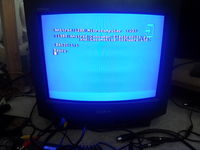 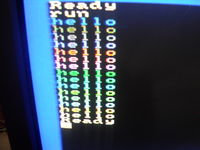 Review of VideoMaster in CPC Attack : 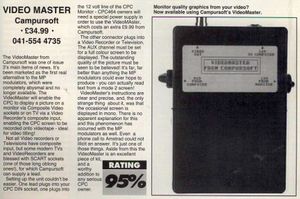 All pics by Terje Grind (Thank you man!)