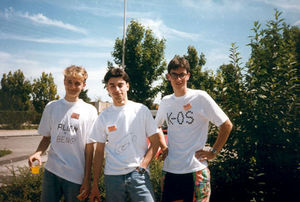 Three members of BENG!: Alien, Crown and K-OS at the Euromeeting Reims 1992