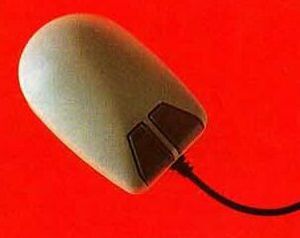 The mouse that came with the CPC mousepack

A mouse for the Amstrad CPC. The CPC mousepack was manufactured by the German company Reisware.

The exact mechanism that defines when the hardware does output the next 4bit fragment is unknown. The software does manipulate row 9 & row 6 signals, which does somehow request and/or acknowledge the fragments. Looking at the disassembled software, the hardware seems to work like so (not confirmed):

Whereas, one of the "terminate" actions does apparently reset the motion counter(s) to zero. Instead of "row0" one could use any other non-joystick row (ie. anything else than row6,row9). The "invoke" actions do request the MSB, which is then automatically followed (without another request) by the LSB after some hundred clock cycles.

The "Mousepack" mouse is sometimes referred to under different names (the names seem to be mainly coming from the software/copyright text on the floppy disks):