Warning: array_merge_recursive(): Argument #1 is not an array in /home/gryzor/cpcwiki_backup/httpdocs/includes/registration/ExtensionProcessor.php on line 294
 DMA Music Demo - CPCWiki 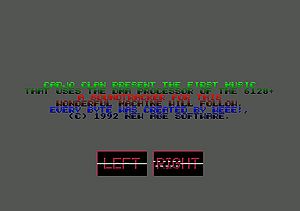 DMA Music Demo is a demo by Weee! of Cadjo Clan released in 1992.

This demo is special in the way that it is the first demo to use the music DMA features of the Plus.

The soundtrack bore more than a passing resemblance to "Metal Machine Music" by Die Krupps.