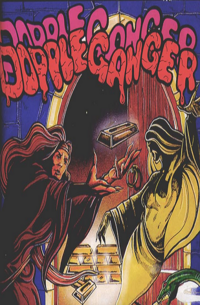 "A mystic journey into the past. A treasure trail adventure in search of gold, silver and bronze as the magical sorceress and her legendary alter ego, test her powers against the forces of evil and powers of darkness in the Castle of Doom. A race against time and a test of your powers of thinking."

The aim of the game is to collect all of the ingots (gold, silver and bronze) that are scattered around the castle and bring them back to the start screen. You will need to use both characters (the sorceress and her alter ego) in order to do this.

You control a sorceress and also her alter ego (the doppleganger) in a 25 room castle (isometric 3D). Each room has a colour coded door frame - which only the sorceress or the doppleganger can pass through. Some doors are locked and need keys. The entire time, an hour glass ticks away which means you have a very limited amount of time to figure out how to top the hourglass back up. Finding the ingots and returning them to the start screen is also challenging, as you will need to switch between the two characters. Some rooms contain moving nasties that can hurt and kill you, also there are a batch of red spiders constantly chasing after the sorceress.