This entry was copied from english Wikipedia 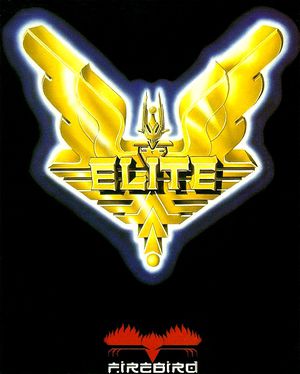 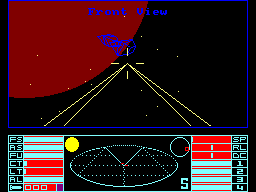 Elite is a seminal space trading computer game, originally published by Acornsoft in 1984 for the BBC Micro and Acorn Electron computers and subsequently ported to many others. The game's title derives from one of the player's goals to raise their combat rating from Harmless, through Mostly Harmless, Poor, Average, Above Average, Competent, Dangerous, and Deadly, before reaching the exalted heights of 'Elite'.

Elite was written and developed by David Braben and Ian Bell, who had met while both were undergraduates at Jesus College, Cambridge University. Non-Acorn versions of the game were published by Firebird.

Elite is often credited with inventing the space trading genre, though it was preceded by a number of space trader games, including the original Star Trader from 1974. This genre melds space-borne combat with a "buy low, sell high" freight transport system; the profits are usually used to purchase ship upgrades.

The game provides eight galaxies, each containing 256 planets to explore. Due to the limited capabilities of 8-bit computers, these worlds are procedurally generated. The player, initially Commander Jameson, starts at Lave Station with 100 Credits and a lightly armed trading ship, a Cobra Mark III. Most of the ships that the player encounters are similarly named after snakes, or other reptiles. Credits can be accumulated through a number of means. These include piracy, trade, military missions, bounty hunting and the mining of asteroids. The money generated by these enterprises allows the player to upgrade their ship with such enhancements as better weapons, shields, increased cargo capacity, an automated docking system, and more. 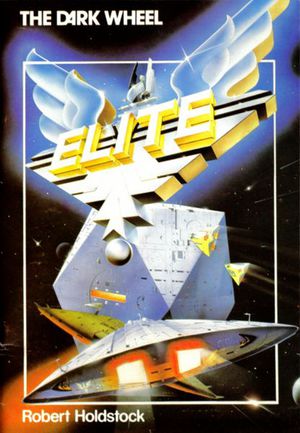 Cover art for The Dark Wheel, a novella included in the Acornsoft release of Elite, duplicating the box art used for that version

Travel between planets is constrained to those within range of the ship's limited fuel capacity (7 light years); fuel can be replenished after docking with a space-station in orbit around a planet - a challenging task without a docking computer, as it requires matching the ship's rotation to that of the station. Players can upgrade their equipment with a fuel scoop, which allows raw fuel to be skimmed from the surface of suns - a dangerous and difficult activity - as well as collecting free-floating cargo canisters and escape capsules liberated after the destruction of other ships.

Travel amongst the 8 galaxies of the game universe is achieved through the purchase of an extremely expensive one-shot galactic hyperspace upgrade. There is little practical difference between the different galaxies, and there are a number of poorly located systems that can be reached only by galactic hyperspace - these are more than 7 light years from their nearest neighbour, thus trapping the traveller.

Elite was one of the first home computer games to utilise wireframe 3D graphics. Another novelty was the inclusion of The Dark Wheel, a novella by Robert Holdstock which influenced new players with insight into the moral and legal codes which they might aspire to. It elevated the technically brilliant software beyond the pigeon-hole of "game".

Elite's open ended game model, advanced game engine and revolutionary 3D graphics ensured that it was ported to virtually every home computer system of the day, and earned it a place as a classic and a genre maker in gaming history. Even now, over 20 years after it was published, Elite is frequently used as a yardstick by which any new space trading game is measured. It has often been said that "Elite has been imitated but never bettered"; while this is perhaps somewhat hyperbolic, it is certainly true to say that Elite is by far the most original, and creatively successful space trading game ever made; the game had a huge impact on many other games, in many other genres.

The Spectrum developers (Torus) only had a 6502 dump of code to base their conversion upon, so they ditched that and played the BBC original to death, and then tried to make the Spectrum version look as close to it as they could. What they had hoped would only take 3-4 months to code eventually took them a whole year! The CPC conversion took much less time thanks to the introduction of the PDS development system.

Two official sequels were created: Frontier: Elite 2 (1993) and Frontier: First Encounters (1995), both produced by Braben's company Frontier Developments. Bell was not involved in their production. Both games were a considerable advance on the original Elite, with filled 3D graphics, missions and a complex economy. This time, the player was not confined to orbit but could land on and explore or mine planets. The number of flyable ships was greatly increased, and a new political backstory was introduced enabling the player to gain ranks in competing interstellar empires. The games appeared on the Commodore Amiga, Atari ST and IBM PC (Elite for the PC was written for CGA graphics cards by Andy Onions and was released in 1988. In 1991 it was followed by Elite Plus for EGA, VGA and MCGA capable graphics cards and coded entirely in assembly language by Chris Sawyer of RollerCoaster Tycoon fame).

Both games were, however, significantly flawed in a number of respects. They had a copy prevention system which was, remarkably, even more user-unfriendly than the infamous Lenslok device used on the ZX Spectrum version of the original Elite. Both games had many bugs, First Encounters in particular, due apparently to being published in an incomplete state, and First Encounters had to be extensively patched; this became the subject of a three-year lawsuit between the publisher - GameTek - and Braben. The gameplay was certainly more sophisticated than that of the original Elite but was nonetheless somewhat repetitive.

In addition, the games included a realistic flight model based on Newtonian physics rather than the original arcade-style engine. While this was certainly much more authentic, many players also found it frustratingly difficult, particularly in combat. Most space trading games since Elite have stuck to an arcade-style flight model, in which the ships behave as though they are flying in an atmosphere. Curiously, most film and television depictions of space flight have also done the same; this perhaps demonstrates that earthbound humans seem to have difficulty in adjusting to the mechanics of Newtonian space flight.

A variant of the original BBC Micro Elite with many extra features, originally titled Elite III but now known as Elite A to minimize confusion, was created by Angus Duggan in the 1990s by the remarkable method of disassembling and modifying the 6502 code from the commercial release. It includes many more ship types, more ship types flyable by the player (who begins in the less capable Adder), cargo delivery missions, some extra equipment items and numerous gameplay improvements. Like the original game, it can be downloaded free from Ian Bell's web site and played under emulation.

A new sequel, Elite 4, is currently under development. Many fans of the series are sceptical that it will ever be released, or believe that it will be greatly delayed.

ArcElite, the port to the Acorn Archimedes written by Warren Burch and Clive Gringras, is widely regarded as the best conversion of the classic game, adding intelligent opponents who engage in their own private battles and police who take an active interest in protecting the law. The game world no longer seems to be centered around the player; freighter fleets with escorts go about their own business, pirate formations patrol lawless systems looking for cargo to loot and mining ships can often be found breaking up asteroids for their mineral content. Unlike the mythical Generation Ships of the original, rare occurrences really can be found in ArcElite - geometric formations of space beacons; hermits living among the asteroids; abandoned ships towed by police.

In the late 1980s there were several attempts to create Elite-like games. The most hyped of these was FOFT (Federation of Free Traders) produced for the Atari ST and Amiga, the leading game machines of their day. However, FOFT was largely panned by reviewers and was not a commercial success. Other respected space simulations were released for the ST and Amiga, such as Starglider 2, Damocles (Mercenary 2) and Warhead. These games are more limited in scope than Elite, in which the player could freely trade around the galaxy.

Many attempts to develop clones of Elite have ended in disaster. Elite: The New Kind, was developed by Christian Pinder from a reverse-engineered copy of the original BBC Micro version of Elite, but had to be withdrawn from the main distribution site after David Braben objected on copyright grounds. (The dispute has since been settled and Elite: The New Kind can be downloaded once more.) Elite Platinum, another ambitious project aiming to capture the essence of the 16-bit ports, was abandoned near completion. Elite Legacy, an attempt to write an Elite clone with a vastly superior 3D accelerated graphics engine, was also abandoned when the author was hired by a commercial game developer.

However, not all attempts failed. Oolite, initially an OpenGL Mac OS X reimplementation first released in July 2004, has since been successfully ported to Linux, and Microsoft Windows. The latest evolutions has seen ports for SGI IRIX and FreeBSD on Intel architectures made available.

The open source game Vega Strike can be considered a spiritual successor of Elite and shares some gameplay features with it. Coming full circle, an Elite mod for the Vega Strike engine is in the works.

In 2004, the commercial product Elite Starfighter was released in Germany. Starfighter is an Elite clone that features modern graphics. Since it duplicates the original gameplay, it has been criticized as being somewhat dull by today's standards, but Elite enthusiasts might consider it worth taking a look.

In 1999/2000, a dispute occurred between Ian Bell and David Braben regarding the former's decision to make available all versions of the original Elite. The dispute has now ended; the various versions are available on Bell's site. The two Frontier games are available for download from Braben's Elite Club website.