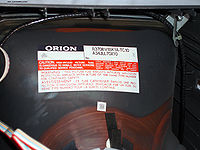 Orion is one the LK-selectable Brand Names contained in the CPC BIOS, allowing to display the boot message Orion 64K Microcomputer on power up. Amstrad apparently planned a partnership with a company with that name.

At least one "Orion" branded CPC is known to have been sold in Shenzhen, China. It is unknown if it was meant for the Chinese market, Asian market, or imported from Hong Kong.

The ISP KG acts eurorean retailer for japanese ORION products (from 1975 until today), mentioned here because the CPC BIOS also includes Isp as selectable brand name, which may refer to ISP KG.

Confusingly, there are two ORIONs, both using nearly identical logos, and both spanning a nearly identical range of products. For example, both are selling television sets with the ORION brand name. Orion (Hungary), founded in 1913, has confirmed that they are not related with each other.

The Cliff Lawson Interview isn't perfectly clear which company they were referring to: It only says "far east", but not how far. Considering that the CPC and GX4000 were manufactured in Korea and Japan, it's quite obvious that "far east" meant east Asia to Amstrad; Hungary is central Europe, and it couldn't even really be called east Europe.

Orion was the manufacturer of amstrad computers/monitor/keyboards and printers, not only the cpc range, the pc range to.

This can be extrated from the spanish boe. (the official boletin of spanish goverment). Back in 80, as was a imported product amstrad need obtain permison of the goverment to import it.

So searching in the boe we can view: