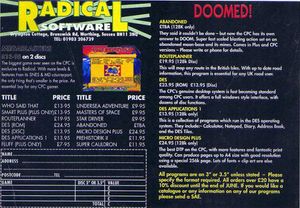 was the software company founded by Rob Buckley (Trebmint), selling principally his own software. He was later joined in the company by Angela Cook. The company concentrated on games, but did sell some serious software.

After Rob's own productions garnered a lot of attention, a couple of other programmers submitted their games for Radical to publish. It was the most active games software house in the closing days of the CPC's commercial existence. However, games were only ever sold through mail order.

All of its games were released into the public domain in 1997. Angela Cook remarked that total sales in the first half of the year had been less than 10.