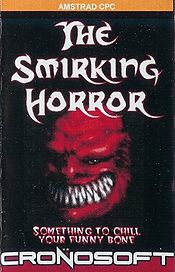 The Smirking Horror is a text adventure that was written by Jason Davis using The Graphic Adventure Creator.

It was originally released by WoW Software in 1991, and was re-released by Cronosoft in October 2004.

The game is a parody of The Lurking Horror, another classic text adventure by Infocom which was released for the Amstrad CPC (as well as many other computers) in 1987.

It takes place in the fictional PUE Tech (Philip Urwin Edwards College), where there have been stories of frequent disappearances.

You have travelled to the college through a blizzard in order to finish your assignment.

Fans of The Lurking Horror will instantly recognise this scenario.