Difference between revisions of "View to a Kill"

The first computerised adventure of the world's favourite secret agent on the CPC.

INTRODUCTION Your name is Bond - James Bond, the world's top Secret Agent, and now embarking on one of the most important missions of your career. To fail is the worst thing that can happen to you. Your objective is to discover what dastardly plan is being hatched by Max Zorin, an unscrupulous European electronics magnate, and prevent him from carrying it out. You learn that the information you need is in three main locations. Paris, where you must make contact with May Day to get a vital clue. The City Hall in San Francisco, where various secrets are hidden, and finally a Silver Mine under Silicon Valley, where you piece together your information and finally foil Max Zorin - we all hope!

At the end of the first two games you'll be given a code which you must type in at the start of each new game. This simply tells the program how well you've done in the last game, and passes over various helpful pieces of information. You may play any game at any time, but to be totally successful in the final game you must have done as well as James Bond himself would have! This will become apparent as you play each game. Once you've got the codes, you can always use them again - the numbers are not randomly generated each time. However, you may wish to improve them each time.

Each game is played in real time. You're against the clock - and good times are passed on via the code to give you more time in subsequent games.

James Bond doesn't exactly die - but he can fail when you play him! He may irrevocably damage his car around Paris - or become engulfed in flames in City Hall. How the real James Bond gets out of these situations without your help (some might say interference!) is left to your imagination. Needless to say, he lives to fight another day, and you can try, try and try again.

hit single "A View to a Kill" by Duran Duran and John Barry (c) 1985 Tritec Music Ltd/CBS Songs Ltd. Reproduced by permission at various points in the game.

The scene is set: Bond has been briefed by 'M' and has been instructed to find out what Max Zorin's plot is all about. He has lunch in the Eiffel Tower with a friendly Agent who is killed by May Day. Bond chases her up the Tower, but she hurls herself off the top and parachutes to a drop point on the outskirts of Paris. He leaps onto the top of the Tower lift and commandeers a taxi at the bottom. From then on, you take over. You can follow her movements with the aid of a radio tracker, which indicates her proximity and her altitude, and her shadow will pass over your aerial view. You can see the building in front of you through the windscreen, and your speed, the time and your damage is indicated on the dash-board. Your objective is to reach the correct drop point exactly at the same time as she does, but be careful. The winds constantly change, and her direction may alter at any time, landing her on any one of a number of possible drop points.

Along your route you will encounter various hazards. The street's one way system is indicated by little yellow arrows, and going against the system may cause the police cars to chase you. Watch out, they may take a pot shot at you! The drivers around Paris are fairly reckless, and the odd Porsche may career into you. There are barriers to avoid, and brushing into buildings will definitely take it out on your blue Renault. Because Bond never travels without a pistol, you can use one here to knock out unwelcome vehicles which may get into your path. Also, being an expert driver, handbrake turns are easy for you, and may get you out of tricky situations!

Controls - for details of joystick or keyboard controls see the title screen.

In the event that you fail to catch May Day the game will automatically start again. Maybe you'll have learnt something! If you do well your code will be important for use in later games. It relates your success to the other programs, in a way that you'll subsequently discover.

James Bond has travelled to San Francisco in his search for Max Zorin. Armed with the information from May Day he finds him in the City Hall, but Zorin turns the tables. At gun point, Bond and his companion, Stacey, are pushed into the lift, and trapped between floors. In an effort to finish them off in an "accident", Zorin sets fire to the top floor of the City Hall, and leaves. Bond pulls himself out of the lift and must now get Stacey and himself out of the burning building. You take over at this point. Using the "duck shoot" menu system, you can either move Bond from room to room, or take action, such as searching, using, dropping or issuing commands to Stacey. You can also select the top menu, to collect objects which will be useful later on. There is however a limit to what you can carry, so be selective. Your objective is to find some way of getting Stacey out of the lift, and fight your way to safety. You will notice that the fire has started on your view of the City Hall. This will spread across with time, and although the odd fire bucket will slow it down, you've got to move fast. Unfortunately, if you get too close to the fire, you become hot and find it difficult to breathe. This has the effect of flowing your actions. If the fire catches up with you or you get into a burning room, you will be totally overcome, and have to start again. Stacey won't love you much if you fail her. To help you in your task, a light will shine on the plan view of the City Hall to indicate your location. Once a room has been visited, it will be marked in colour to show your achievement. Use door passes correctly, and consider what items might be helpful in getting Stacey out of the lift shaft. Once you've got her, don't forget to hurry to find a way out. It's not as easy as it seems!

Important. To get out, you're going to need a set of numbers, which fit into the code holder you start off with. When filled, this holder must be set to break the security-locked door at the bottom right of the City Hall - and that's a long way!

HOW THE "DUCK SHOOT" WORKS

GUN AND BULLETS: You will find a gun and some bullets in the City Hall. Using the gun you can shoot open the interconnecting doors. To do this, select the gun and then select the USE option. It takes two uses of the gun to shoot open a door. Take care, you will only find a small number of bullets, don't get too trigger happy. DOOR KEYS: These keys are colour coded for specific doors. They can only be used in the door for which they are intended. SECURITY CARDS: These are colour coded for the doors for which they are intended. N.B. The yellow card is outlined in black. CUPBOARD KEYS: Colour coded and can be used to open locked cupboards. MINE PASS and GEIGER COUNTER: Get these and they will aid you in the mine.

You will find many other objects, but you will have to work out how they can help you or hinder you.

GAME 3: THE MINE - SILICON VALLEY

At last, Max Zorin's plan is revealed. As Bond suspected all along, the evil mastermind of the electronics empire is intent on capturing the sili- con chip market. What better way to achieve this than blowing up the disused mine under Silicon Valley and set off the geological faults to send the whole area into the Pacific? Bond enters the old mine to discover the nuclear detonator has been set and time is ticking away. The bomb is in an underground cavern, and the only way to get it out is to be winched down. He needs help - and May Day is the only person strong enough to help him. She may be Zorin's henchperson, but surely she must realize the insanity of it all? He must find her and persuade her to aid him in his effort to save countless lives and the computer world! This is where you take over. You're in the mine, and must use the objects you find and the help you need to defuse the bomb before it is too late!

As you run through the mine, use the lift to reach different levels, or climb ropes to get the various items which will be useful. Sometimes you may have to tumble into oblivion, but you can look before you jump. Watch out for the nasty pits - have you got your grappling hook? Will the dynamite blow up the section of rock you want to go through? Have you got what you need to light it? Will time run out, will the Pacific's fish meet Silicon Valley's chips? All this and more awaits you!

Important: When you've found May Day, she will set off on another route; meet her at the winching point later on, but make sure you've freed her before you leave. Your reward for succeeding is a fitting end for such an accomplished super Secret Agent!

The Mine Duck Shoot works in the same way as the duck shoot in City Hall. There are some different commands, these are as follows:

GRAPNEL GUN: using the gun will allow you to shoot a rope up from your position to whatever is above. You will then be able to jump onto the rope and climb it as normal. When you jump off, the rope will rewind. Take care; you only have a limited number of charges. DYNAMITE AND LIGHTER: Both of these objects can be used in conjunction to blow up certain rocks. GEIGER COUNTER: If you found this in the City Hall, it will then be displayed on screen and will show how close to the bomb you are. CODE NUMBERS: You will find numbers throughout the mine, five of these numbers, used in the correct order, will defuse the detonator. It is possible to find out which are the correct numbers and sequence. But that is a problem worthy of the best Secret Agent! 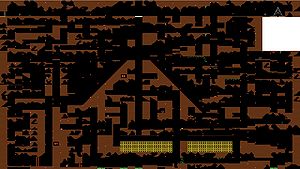