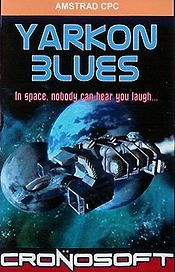 Yarkon Blues is a text adventure that was written by Jason Davis using The Graphic Adventure Creator.

It was originally written in 1988, but Amstrad Action's Balrog advised Jason that more playtesting was required before it should be considered for release.

It was eventually released by WoW Software in 1990, and was re-released by Cronosoft in February 2005.

The game sees you playing Rik McQuick, who has crashed his spaceship Odour-Eater II on the planet of Yarkon.

You must explore Yarkon and help him to escape from the planet.