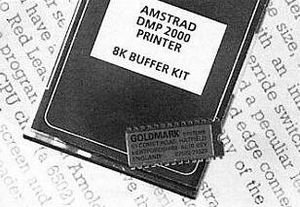 The "kit" seems to be simply consisting of a 8K SRAM chip, to be used as replacement for the printers built-in 2K SRAM, increasing the buffer size by 6K. Aside from exchanging the RAM chip, one must also change the J3 jumper on the PCB (as shown in the DMP2000 Schematic).

The upgrade should also work with the DMP2160 printer (a faster version of the DMP2000, which has only 2K RAM built-in, too). The DMP3000 and later models do include 8K RAM built-in, so there's no need to upgrade them.