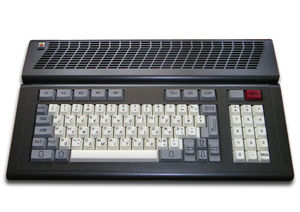 The Aleste 520EX is a clone of the Amstrad CPC 6128 developed 1993 by Patisonic in Omsk (Siberia). The Aleste is rare, according to Patisonic themselves, they "produced several dozens of the model, some of them were in 'kit' form".

The above photos are showing a more or less fully assembled Aleste (the LEDs are missing, and, more important, there is no connection for an internal or external power supply attached to the mainboard - unless the owner used the Expansion Port connector to inject power supply voltages).

This version has 7pin+7pin sockets for printer (normal would be 5pin+7pin, though the extra pins are most probably left unused).

A sound card for the Aleste.