A puzzle game released by Gremlin Graphics in 1987.

Deflektor is a puzzle game developed by Vortex Software and published by Gremlin Graphics in 1987. In this game, the player has to rotate mirrors to deflect a beam in order to destroy all the mines of each level. There are also other devices the player has to be careful not to touch with the beam for too much time because otherwise the system will overload. The game was followed by a sequel in 1989 called Mindbender.

The Amstrad version is in Mode 1. It uses interrupts to increase the number of colours on screen.

Clearly it is a Speccy Port in some way but done really well. It uses Amstrad's Mode 1 well and even has a wider display (320 wide vs the normal 256 width for Speccy ports.

In addition the inks are often changed from one level to another giving a varied feeling (as in Head over Heels for example).

Compared to Spectrum version it lacks colour clash, uses the Amstrad's wider screen better (although the play area is the same as the Spectrum) and has a more detailed HUD. The music is the same as that on a 128k Spectrum. It could be argued it has less colours than the Spectrum version, but overall it is a nice clean look. Otherwise, the graphics are identical pixel-wise.

The C64 version used its lower resolution which is comparable to Amstrad's Mode 0 (16 colours and wide pixels 2x1). The square pixels of Amstrad's mode 1 enable fine graphics well adapted for this game play as the graphics are made of square and round or diagonal geometric shapes.

Both Amstrad and C64 had good music.

The tape version has an interesting loader. While the game is loaded we are shown a title screen AND instructions of how to play are also shown, but these are updated as it loads. It gives a nice experience to the loading.

This games include 60 levels.

Modern remakes have been done. 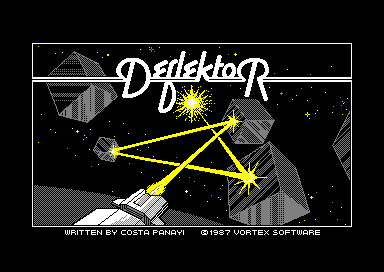 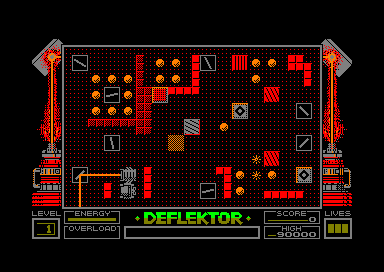 The 60 levels on speccy, courtesy of maps.speccy.cz

Level 60 doesn't have any mirrors. All the blocks make the laser fire in a random direction, so you just sit and wait until all blobs are destroyed and it hits the target.

"One of the few loaders that shows something other than raster bars or even worst, nothing! " courtesy of Asicys