Dizzy Down The Rapids 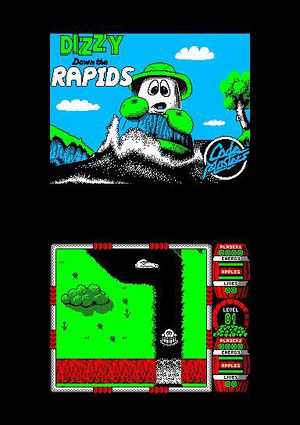 Dizzy and Daisy were out in the enchanted forest picking blue berries for a pie they were making for a dinner party.

"I can see some bigger ones over there" said Daisy.

Dizzy trotted over to the bush "These are still too small", he said forlornly, "we're never going to get enough!".

"How about these?" pointed out Daisy wandering yet further into the wood.

before they knew it the two eggs had wandered far into the forest.

But the time they reached the banks of the Great Torrent River, the two knew they had become hopelessly lost.

Dizzy span around to be confronted by Rockwart the Troll and a gang of ferocious looking henchtrolls.

"I have you now little Egg!" breathed Rockwart in his most sinister voice.

Quick as a flash Dizzy grabbed Daisy's hand and the pair ran desperately toward the river.

"Hee HEE HEE!" laughed Rockwart manically as the trolls moved in ever closer.

But Dizzy had a plan - "Jump in here Daisy" he cried as he somersaulted towards and abandoned apple barrel.

"We've escaped" he shouted back to the trolls in glee.

Daisy screamed because Daisy could only see what was in front of them...