The battle for Icemark continues in this complex and engaging follow-up to The Lords of Midnight.

The background story is explained in the instruction manual, and I have neither the time nor inclination to type it all in here! But it goes something like this:

Doomdark has been defeated, but his successor Shareth the Heartstealer has struck back and kidnapped Morkin the Free, son of Luxor the Moonprince. He is being held in the Plains of Anvaril, surrounded by the frozen wastes at the North of Icemark.

His heart has been turned against Luxor and only Tarithel the Fey can break Shareth's spell and bring him back to the side of good.

Shareth, meanwhile, is intent on gathering together an army to defeat Luxor.

Your mission, should you choose to accept it, is to rescue Morkin the Free, to defeat Shareth the Heartstealer in battle and to search for the Runes of Finorn - an ancient and magical message which may be read by Rorthron the Wise. When this has been done you must return Luxor and, if they survive, Rorthron, Morkin and Tarithel to the Gate of Varenorn and at nightfall your task will have been completed. If this proves too difficult you may opt for just one or two of the above: if Shareth is defeated or Morkin is free you have gained a partial victory. Should Morkin or Tarithe be killed you can still achieve this but Luxor's overwhelming grief could well be his downfall. If Luxor is slain, however, then Shareth has won victory.

Apart from the Runes of Finorn there are three magical items scattered around Icemark to help you. They are Luxor's Crown of Varenand, Tarithel's Spell of Thigrorn and Morkin's Crown of Carudrium. Each warrior also has a weapon bearing his name which he may find and pick up for extra strength. The special power of each of these items may be used once, although carrying any weapon will always give an advantage in battle.

The land of Icemark contains several kinds of terrain: plains, forests, hills and mountains, as well as the frozen wastes which are impossible to cross. The speed at which a character can travel depends on the terrain; for instance, travelling through mountains takes longer and is more tiring than travelling through plains. Each race of people has a favourite kind of terrain which they find easier to travel through; for instance the Fey people can travel faster through forests than other people. Travelling can be made more difficult by the strength-sapping mist rolling across the country which was created by Shareth the Heartstealer, and by dragons and other wild creatures travelling across the land. However, should your trusty steed be killed you can sometimes find stray horses to replace it. Losing your horse of course makes you slower and more quickly tired. To kill wild creatures or to change horses you just walk through them.

Beneath the land of Icemark is an extensive set of underground tunnels. You can enter and exit from the tunnels at certain places described below. The underground system is the only way to reach Morkin who is surrounded by the Frozen Wastes. In a tunnel you are safe from attackers but there will be dragons, skulkrin and trolls to delay your journey.

Icemark also has several kinds of landmark. They are as follows.

You control each character independently using the person select keys. The four main protagonists have their own keys (although the Morkin key does not work until he is back on the side of Luxor); the others can be selected by pressing the 'select' key. The 'more' key can be used to page through the options if there are more than ten of them. Each character has eight hours in which to travel or rest. Any character who still has hours left in the day can be moved at any time. You can look around by using the direction keys. The 'look' key is used to give a view if one is not currently on the screen (because some information is there instead). To move forward, press the 'move' key. Moving in the 'diagonal' directions takes up to 1.5 times as long as moving North, South, East or West. In order to do something other than moving, such as resting for the remainder of the day, attacking an enemy or entering an underground tunnel, press 'choose'. Information about the location (including whether there is an object on the floor and information about any person who might be standing just ahead of you) can be viewed with 'check place'; similarly, 'check battle' provides information about the previous night's battles, 'check army' displays information about the character's army and 'check person' displays information on the character's personality.

When all characters have done all their moves for the day, press the 'night' key. There will be a delay while the computer moves all of Shareth's forces and the independent characters, calculates the results of battles, and refreshes the spells and wild creatures which may be found at various locations in Icemark. Eventually, dawn breaks and you can resume the game by pressing the 'dawn' key.

When you are standing before an enemy - or anyone that is not your friend - you have two choices: to approach them for negotiations or to attack them. Either choice may be made by pressing the 'choose' key (as long as it is still daytime). If you approach them and fail then they will attack you. If this happens, or if you attack, then the rest of the day will be used up in fighting; the result of the battle will be decided during the night. If enemy characters are still alive and occupying the same locations by the time dawn breaks then you have the choice of moving away or continuing the fight by remaining in the same place. In order to approach a character he must be standing by himself. If you approach him and succeed then you will be given control of that character and be able to move for the rest of the day. You are more likely to succeed in recruiting a character if you choose someone to approach him whose personality is similar to his. However, it goes without saying that you will never manage to turn Shareth the Heartstealer away from evil, and only Tarithel will successfully be able to approach Morkin. 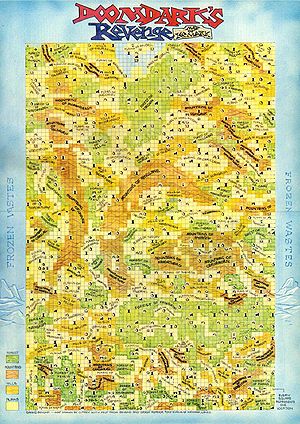