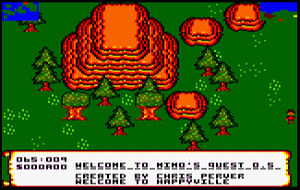 Mimo's Quest is an adventure game for the Amstrad CPC range of computers. Mimo has wandered away from his island home and gotten lost, and the player must guide him through strange lands and undertake various quests in order for him to find his way back again.

Mimo's Quest is written by Chris Perver in Z80 assembly using the WinAPE CPC emulator as an assembler. The game is currently in an unfinished state, awaiting the development of a proper story line, quests and sound effects, though the game world itself and quest and inventory management system is functioning properly. The game is made in the style of Zelda, with lands to explore, characters to talk to, quests to fulfil and items to collect. The author also drew inspiration for the game world from reading of the Oliver Twins and their efforts to create a pseudorandomly generated world game called Excalibar.

The source code for Mimo's Quest has been made available on the author's website (https://www.evenmore.co.uk/mimosquest.htm) for those who wish to learn Z80 programming on the Amstrad or see how a game is written. A disk version is currently available to download, and a tape version with inlay card will follow once the game is complete. A cartridge version for plus machines is also currently under development.

Type RUN"MIMO to load the game. The loader will detect whether there is 64k or 128k of RAM available and load the corresponding version.

The world is made up of several islands which have various themes. There is around a square mile of map for the player to explore, containing houses, caves, castles, dungeons, underwater regions and more. Moving between the islands is possible using a variety of methods. There is a tropical zone, a wild west zone, an American Indian zone, a knight zone, a plains zone, an autumn zone, a winter zone, a mountain zone, etc. There are four seasons, weeks, and day and night periods, which help to add an additional level of realism to the world, and will be used to mark special events such as festivals.

Mimo can enter most buildings during the day. In each of these buildings there are characters to talk to. Mimo can interact with these characters by pressing against them. They may make conversation, have an item to trade or have a quest for Mimo to fulfil.

Mimo can buy or sell any of his items at the shop by speaking to the shopkeeper. Some items, such as the bow, arrows, axe, flippers and rope can be used by Mimo. For example, trees can be chopped down using the axe, and the lumber sold at the shop to make money. Shop prices will vary depending on how many of each item the shopkeeper has, and this will allow Mimo to build up his money by trading between shops.