MULTIPLAN is a spreadsheet application by Microsoft. It was called at former times (1983) one of the most powerful and user-friendly "electronic worksheets" and together with VisiCalc (from Software Arts), a typical CP/M application of its time (late seventies / early eighties).

The application runs under CP/M with at least one floppy disk drive and a memory of 128 kByte, better with at least 62 Kbytes TPA (free space available under a patched CP/M2.2 or - of course - plus / 3), and a monitor 80 characters per line (which is included by the purchased standard monitors GT & GTM - they managed this resolution by default). Multiplan runs on all CPCs of the old (and new) generation, provided the computers 464 and 664 had a memory expansion (eg. VORTEX, or other, similar additional hardware). A printer could be accessed via the Centronics interface. The operation of a second floppy drive was recommended in terms of a more comfortable work. Also it is highly recommended that a CP/M patch for fast textout is applied in terms for "ergonomically" working. All files of the original Multiplan version being used on the usual 170 kByte 135 kByte floppy (without operating system).

a MULTIPLAN description in short 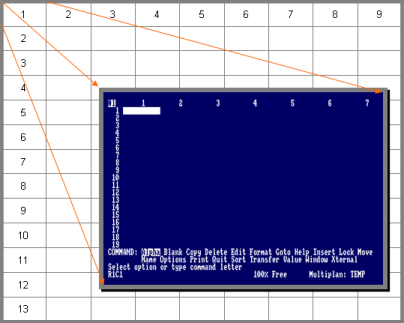 The maximum size of a single table can theoretically result in 16,065 fields from an array of up to 255 rows and 63 columns (see picture 1) and is about 1.2 MByte deposited without an operating system / just numbers either formula nor text. On a CPC with 128 kbyte memory it can be filled thus 10% or 1500 fields. Here, however, can only be a maximum of eight windows (contiguous sections of a table) be used. Multiple worksheets in a table can be combined to create a connection.

In the same way like his successor, Windows-Excel, it can be entered directly in the fields with text, values ​​or formulas. The field itself can be selected via a row-column coordinate system. The formats of the columns can be changed in a very limited basis (due to text-only presentation). Cells can be assigned names. Areas can be protected against overwriting. The application provides menus for selecting functions or assistance (eg, sorting, iteration, mathematical, numerical, logical functions such as SIN, COS, LN, LOG, MAX, MIN, STDEV, AND, OR, IF / THEN, etc.). Data exchange with other programs (eg, the former WordStar) was possible.

On the top level of the screen (about 80 percent) you will see the table with its row and column indicators. The maximum by default is 7 columns and 19 rows. The first area is highlighted. Changing the area could be done by pressing the cursor keys.

There are two command lines underneath which could be highlighted by the Tab key and activated with Enter key.
The next two lins show the command status and underneath on the left side the actual highlighted area, in the middle free space and on the right side the name of the file.

The command ALPHA it is possible to insert text only. Just press [TAB] oder the inital or key-stroke "A" (or in other languages its analog character). If [RETURN] is pressed the next cell is highlighted. If a [CURSOR KEY] is pressed the next cell is highlighted AND it is possible to enter either a number, a text or a formula to the corresponding text (= quick method for data input).

To insert a number, figure or a formula press TAB until you reach VALUE or press its initial. Normally you put in a number between 0-9. Nothing else, but a formula.
With formulas you can let the computer calculate stuff for you. And - the same way as it is in Excel or other modern spreadsheet applications - you to tell it what to do. 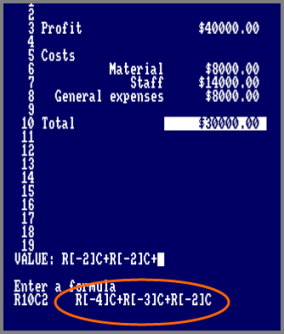 In the picture on the right you'll see a relative cell relation from the result cell where you have been starting. For inserting a formula just press V or "=" Key.
Together with formulas comes the command NAME. Multiplan is able to define a certain name for a certain cells or range of cells. Why? Manpower tends to cope with its enviroment in an easier way if it is built up visual. That means: it is easier for mankind to remind a name than a quantity of figures (mainly if it has more than 5 to 7 digits). The brain abstracts a name and put it togeter with experiences which can be called up very fast and ...easy. That's all. For the same reason a mnemonic (= crib) code was established for the assembler language insteand of working with binary digits. Came back: it is possible to assamble a formula with the help of cell names instead their absolut positions in the coordinates system. A name is independent from its content. It is possible to delete the content the name still is available. To delete a name you have to delete in NAME the "...to refer to:..." relationship.
Despite the fact that every name "wastes" a byte or more in the spread sheet and therefore rare memory will decrease, the fact that multiplan can apply ONE name over a certain range and a formula which uses a name out of that range and still knows the relation is a quite unique technique. Even MS Excel can't do this in that easy way.

For changing a cell / row / coloumn format you will enter the FORMAT command. Their options are "Cells, Default, Options, Width". With "Cells" you're able to define a single cells appearance (alignment or format-code). Alignment could be: Default, Center, Block, Left or Right. Format-code could be: Default, Continous, Exponential, Fix Comma Number, Block, Integer, Currency, Chart, Percent, no changes. (Default means for text > left alignement, and for figures > right alignement, no decimals and currency).

By the way: To define or operate over a range of cells it is necessary to use a colon between two cell-item-specification. R1C1:R1C6 = is a range of six cells among each other. If you want to change a format e.g. for only a certain line you specificate the range like that R1C1:63 (last cell in that line). So the next 62 cells right from R1C1 have the same specification like R1C1. If you specificate the range like this R1C1:C63 than all cells in a range R1C1 to last Row in sheet and C63 will be adapted (and could take a very long time!).

With the command INSERT or DELETE you are able to insert or delete a certain number of rows or coloumns before or after the highlighted cell. The command BLANK is as easy as it is said. Delete a cells content or put a blank in it. Just a matter of the point of view.

COPY let the applications copy the highlighted cells (content or formula) in a self-explaining way (possibilities can be right, down and "from... to... " is possible, but that's enough).

For loading and saving your sheets you can use the TRANSFER command. Enhance the file name with the driver letter for changing the data storing enviroment.