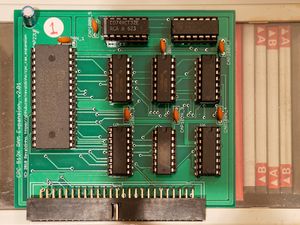 Old School 512KByte RAM Expansion for CPC6128 and Plus 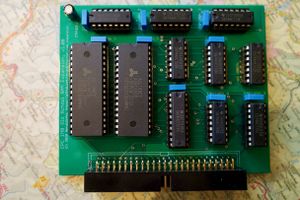 Old School 1MByte RAM Expansion for CPC6128 and Plus

This project contains is a pair of RAM cards providing either 512KByte or 1MByte expansions which are fully DK'tronics compatible for the first 512KBytes - see the DK'Tronics Peripheral Technical Manual. The 1MByte card uses the Yarek addressing scheme to access the second 512KBytes and this is fully compatible with FutureOS for example.

Both cards are designed using only standard 74 Series logic ICs and a single SRAM chip. There are no devices which need programming and all parts are in through-hole packages to make for a board which is easily assembled even by a beginner.

Electrically, the cards both use very low power. In typical use they draw only a couple of mA of current which is significantly less than that taken by other CPLD based cards. The SRAM and HCT logic components are also very tolerant of low supply voltage and the cards have been tested to work even as low as 3.5V.

The card has a Mother MX4 standard box connector rather than an edge connector. So to use the board you will need a Mother X4 or compatible expansion card.

This is a fully open source project under the GPL3 license, and all code and further documentation is available on the project's GitHub pages and Wiki

The bare PCBs are available from SeeedStudio via their gallery pages:

Bare PCBs or fully assembled cards may from time to time be available also directly from Revaldinho - please PM via the Discussion Forum to check.