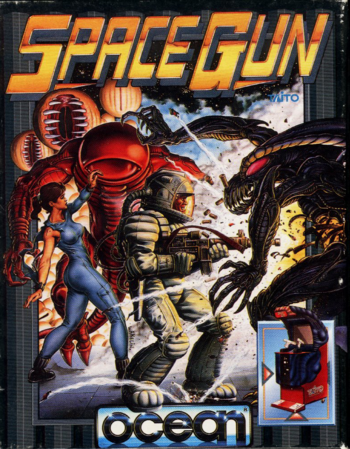 Space Gun is set in a fictional future, in the year 2039, where humans have begun deep space exploration. From a crippled ship a distress call is transmitted and it is up to the game's protagonist, a special soldier, to respond to the call. When the protagonist boards the ship, they discover it been overrun by hostile and violent alien beings that must be destroyed. The aliens have captured the human crew for an unknown purpose. The story has sections that take place aboard the space craft and on the planet's surface. The protagonist's overall goal is to rescue as many human hostages as possible, eliminate the alien threat and escape the stricken space craft.

This game is not really good indeed.

The reason is that it is a shamefull Speccy Port.

Just look at the Spectrum version to see what i mean.

The unmasked sprites are a clue, this was used so spectrum wouldn't feature colour clashes...

Ocean was such a great company, yet at the end of the Amstrad Era, they massively ported speccy games instead of doing better stuff, most of them even ended as Vaporware (see Toki).

Supposed to be released as a cartridge game, it was finally rushed to the release probably unfinished as a 6128PLUS disk game.

It uses 128K RAM as launching it on emulator in 64K mode do not work (when coming to game part).

The Coder is the same man who did the quite impressive spectrum version.

But sadly, as he had to change the project from being ROM based to disk based... and as he also probably had no time to finish it completely... the end result is Half promising, half simply not working.

Backgrounds are properly CPC/PLUS coded as the tiles are in 4bpp mode0 and quite well done.

But sprites and animated stuffs are some sort of 1bpp Spectrum graphics (with attributes) transferred into Mode0... probably with a CPU intensive process as the emulation (WinApe, option "find graphics"...) can't enable to find the graphics... (no pre-coded graphix). As a result we can seem ugly attributes and the Wide pixels of Mode0 can't do justice to the design of the varied aliens (on Speccy they manage to look quite good actually)

The use of the Hard-wired sprites is obvious : the target/cross-hair... but sadly the bullets use most of the rest of the HardSprites slots while less or different method could have been used to let some extra Hardsprites slots for extra special effects.

On emulator, the Collision just seem to not work well, on real Hardware this must not be that different.. and the result must be laggy at best.

The playfield also use some raster which are quite similar to the Arcade... but sadly this simply displays even more the unmasked tiles/characters from the sprites. could have been better provided the sprites were properly 4bpp coded as the "raster ink" would be used as a "sort of a mask".

Use of Plus Features

The hardware sprites use ink cycling. The Visor uses 2 sprites with some colour cycling and those sprites may change if you change the selected weapon , bullets use 2 sprites slots per frames (6 frames, so 12 slots) and Radar uses 2 Sprites with colour cycles too. Those sprites are all magnified into pseudo Mode0 sized pixels (X=4 and Y=1). To use sprite for the aiming reticule is an easy way to get masked and smooth movement while the game is non masked and attribute movement based.