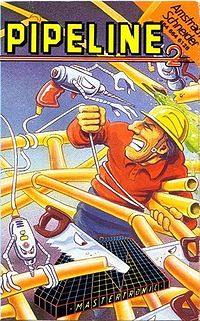 Super Pipeline II is a game from Amsoft/Taskset/Mastertronic.

As Foreman Fred you must defend the pipework supply against the attacks from the manic power drills as they cause leaks and protect your workmen from gnawing caterpillars and ferocious hammers.

Amtix felt that it was "a very playable game which should have most people addicted quickly. The graphics are good and the movement is smooth." At the time of re-issue their opinion had not altered much and they advised that this was still "a game well worth adding to your collection"