The Z-Machine is a text based interpreter which runs text adventures made by Infocom and Z-code files.

It is available for CPC for different OS.

CPCZVM is a Z-Machine interpreter for the CPC. It is a modification of ZXZVM, an interpreter made by John Elliott for the PCW. The Amstrad version was converted by Kevin Thacker. There are two versions, for CPM and AMSDOS.

Zym is a Z-Machine interpreter for SymbOS, made by prevtenet.

CPCZVM for CPM features a virtual memory system supporting both the Z-machines RAM and ROM. It runs under CPM2.2 and CPM+. CPCZVM has been written to be as compatible with CPM as possible and should run on other CPMs for the Amstrad.

CPCZVM will not run under Amstrad's CPM2.2 distribution because it doesn't have enough TPA. However you can use DkTronics_CPM which has a larger TPA.

CPCZVM for AMSDOS requires additional Dk'tronics compatible memory (e.g. X-MEM ). The entire game file is loaded into available RAM so it is recommended to use a 512KB RAM expansion. Loading uses CAS IN CHAR so is very slow.

Zym is a Z-Machine interpreter for SymbOS written in C. It supports Z-machine versions 3, 4, 5, and 8, so it can run most of the games published by Infocom, as well as thousands of other Z-code games created by the interactive fiction community. Zym supports different terminal window sizes and also runs on ALL SymbOS platforms, not only CPC.

Zym requires SymbOS 3.1 or higher and at least 256 KB of RAM to load most games. 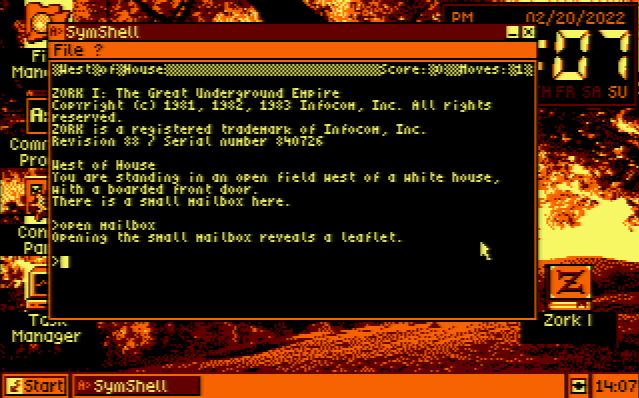