Dan Dare: Pilot Of The Future 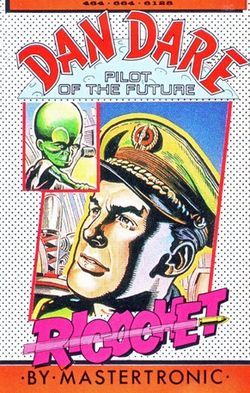 Dan was appearing on "This Is Your Life", all of his friends were there to speak glowingly of his achievements, but as Dan moved forward to speak, the screen went blank and then slowly the evil green face of the Mekon appeared. An Astroid was heading for the Earth, either the powers that be gave in, and announced him as commander of the universe, or the earth was destroyed.

Dan has decided that Professor Peabody and Digby should keep the Anastasia in orbit and out of danger, while he is lowered down on a rope to go and investigate. However unknown to Dan and his friends their arrival had been closely monitored by the Treens, the Mekon's faithful followers. No sooner had he left the ship than he was attacked. Luckily there was a discarded laser lying nearby, Dan rolled to it and picked it up, one shot and the Treen lay dead. There was now no time to loose, he must stop the evil Mekon's plan.

Dan will encounter Treens, mounted wall guns and other hazards, if he is injured by any of these his energy will be sapped, if it reaches zero he will fall unconscious. Should this happen or should he come into contact with a Treen, he will be captured. Fortunately the prisons door are not well secured and Dan will have little difficulty to open them. However he will lose vital time finding his way back through the maze.

The Mekon has left a self-destruct mechanism active, in case Earth should give in to his demands. Dan must find the five parts that are scattered throughout the complex and take them, one by one, to the control room. This is easily recognised as it has five empty sockets. When you put a part into the correct socket it starts to glow. When the last part is in place, Dan must quickly make his way to the surface where his friends are waiting in the Anastasia.

In July, 2010, an Easter Egg was posted in the CPCwiki forum by Sophie. Here's how to get to it:

1. First, go to the screen to the right of the guy who tells you "Get more things Dan". Make sure that the moving laser gun on the right isn't in your way - shoot at it when it's high up.

3. On the platform, go right and jump before reaching the end of the screen. The next screen you enter is the start of a series of hidden screens with messages on them. Keep going right to read everything, and make sure that for the first few screens at least, you jump just before hitting the right hand edge, as the platforms on the next screens don't extend all the way to the left hand edge.

(watch out for the gap between the L and the I on this one, you're stuck if you get in there)

At the end, you have a lift going down, which just takes you to a screen with one platform and no way to continue other than by jumping off:

Jumping off will result in falling into a black screen, then going back to the normal 'captured by the Treens' code.

By the way, if you fall during any of these screens (well, the ones you *can* fall on, anyway), you'll notice that you fall into a later section of the game, so this could even be used as a kind of cheat. The reason it works is because when Dan falls, he normally falls into an empty room (except for the invisible platform mentioned above), then falls *again* from that room into the prison. To avoid an infinite loop, the code that moves Dan to the empty room is disabled for the second fall; the empty room really is located above the prison. Because you end up averting the second fall, you can then fall from the secret rooms into the rooms below. (This is also why there's a black screen at the end when you fall; there's no game data defined for that screen.)