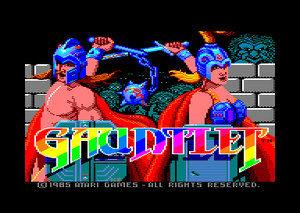 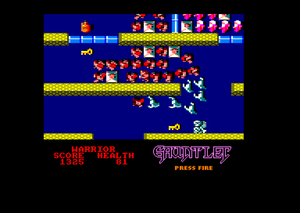 Thor the warrior facing some enemies on level 8

Gauntlet is a a 1986 U.S. Gold hack and slash game after Atari's 1985 arcade. It is considered one of the better arcade conversions for the CPC, with fairly smoothly scrolling graphics and memorable sound effects. Some of the effects, such as opening doors or using an exit might even be called superior to the arcade, but of course the CPC version lacks the speech output which made the arcade famous.

One can play the game indefinitely by using two players and resurrecting the dead playing by the player that's still alive. Of course this approach fails if both players die simultaneously.

Also, if you stand still for a few minutes, all walls turn into exits. This is useful sometimes because levels past level 8 are random and not always solvable, especially if teleporters keep sending the player to the wrong place.

Interspersed with normal levels are bonus levels where you have to collect treasure and make it to an exit within 20 seconds.

One feature of the arcade that most computer versions (also this one) leave out are the fast-moving thieves who occasionally try to snatch things away from you. So in this version you can only lose your possessions by dying. (Your keys can be picked up by remaining players.)

The game was succeeded by Gauntlet 2.